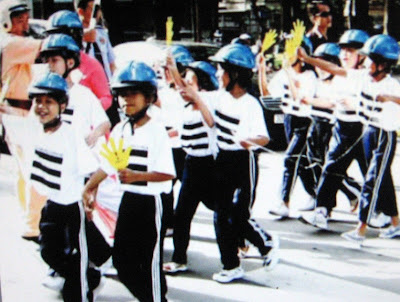 Children MUST wear helmets when crossing the road (see below)

It’s a sin: “cyclists weaving their way through traffic.”

Meanwhile, in a vicious trick designed for no other purpose than to steal from innocent road-tax-paying drivers Camden Council has put up signs on one road which read:

This is totally baffling and you would need to be Einstein to understand it. Yes, shockingly,

Motorists have been fined a staggering £5 million for driving down a quiet residential street which has been dubbed ‘Britain’s most baffling road’.

Brake said that in 2009 cyclists made up just 0.5% of traffic but accounted for 5% of road deaths and 11% of serious injuries.

It added that while road casualties overall had decreased, cyclist deaths and injuries had not.

A cyclist who was able to walk away from a head-on collision with a car is urging other bike riders to wear a helmet.

More road safety tips. This initiative demonstrates how children should cross the road: heavily supervised by adults; wearing crash helmets; carrying hi-viz signals; and tied to each other.

A pensioner driving a sports car mounted a pavement and slammed into a group of pedestrians killing a three year old child. The driver was arrested.

THE driver of a people carrier that hit and fatally injured an elderly pedestrian told an inquest she did not see him at all before the impact. Great-grandfather Leslie Young, 86, of Fitzpaine Road, had sustained multiple injuries, including fractures to his skull. He later died in hospital.

He had been at the back of his parked Vauxhall Cavalier. The Chrysler then collided with the rear offside of the Vauxhall, pushing it into the back of a parked Renault Laguna.

District coroner Sheriff Payne noted that there were no direct witnesses and recorded the verdict that Mr Young’s death was due to an accident.

War on the motorist news. A “Traffic reform campaigner” has been cruelly persecuted: I wasn't doing 91 mph all the time, just to avoid delay down the other side of the hill..

Shock horror – some council car parking ticket machines don’t give change - huge frothing in the Torigraph (“This is absolutely outrageous).

The only speed camera on the southbound M11 is a cruel trick, impartially described in the Daily Mail as “infamous” for its success in catching out innocent drivers who can’t see a series of signs bearing the message 50 mph and SPEED CAMERA AHEAD, followed by a bright yellow object half a mile ahead on a straight road.

Britain’s poisonously car-centric cyclist-hating Department for Transport is exposed as trying to block a European ban on oil derived from the carbon-heavy tar sands of Canada.

By the way, the planet is fucked.

Greenpeace says “It will now be up to us to stop them.”
Posted by Freewheeler at 16:38