The local newspaper reports that the London Borough of Redbridge has just opened what it suggests may be London’s shortest cycle path.

The reporter doesn’t seem to realise that this new Redbridge path has been built as part of one of the exciting new Olympic Greenways, which will bring tens of thousands of smiling Redbridge residents pedalling to the games. Yes, indeed, take a look at the photograph and observe off-road cycle path design in its classic British form. Who wouldn't give up their car for infrastructure like this?

I was delighted to see that the news report comes complete with a quote which shows that there are still a few cycle campaigners left who are prepared to talk sound common sense.

Vic Carroll, ex-Wanstead resident and president of the Redbridge Cycling Club, said: “It’s a good thing if it encourages people to cycle on the pavement. It’s very dangerous to be a cyclist on the roads these days.”

[Update. The paper has now removed this story, I suspect because they were using a copyright photograph without permission. However, if you type 'Redbridge cycle lane' into Google Images the photo appears twice in the first ten pics. I expect the story will be reinstated once the local paper sends its own photographer to the scene.]

In fact the only thing to disagree with in this report is that Redbridge is better than Waltham Forest. This cannot be allowed to stand. Waltham Forest pioneered this kind of infrastructure, and if it’s brevity you want then this is the place to find it, at the junction of Pretoria Avenue and Forest Road, Walthamstow. 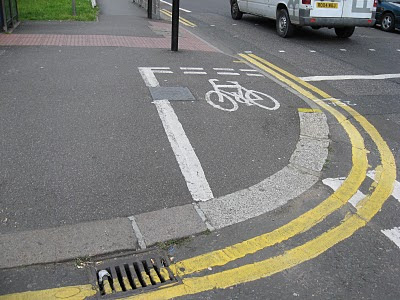