Cycling infrastructure at the main entrance to the University of Sussex. Photo: Adam Pride.

(Below) Installing a bicycle counter by a cycle lane on a dangerous high-speed road which has ample space for a segregated cycle path. The Lewes Road. Photo: Jim Rennie. 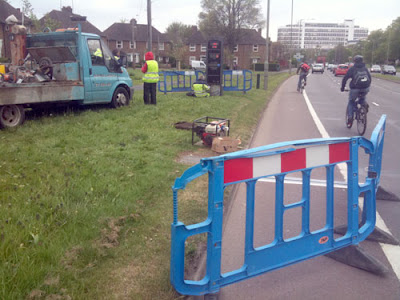 The Green Party has won the most votes on Brighton and Hove council (23 to the Conservatives 18 and Labour’s 13). There’s no overall control but the Greens will run the council.

It is very difficult to find out what the local modal share is for cycling – always a bit of a giveaway for a failed cycling zone – although according to this 2006 piece Brighton has less than 3% cycling modal share.

Brighton and Hove Council boasts a 27% increase in cycling in 2006-2008, but this sounds suspiciously like the kind of spin Transport for London is so good at - boast about increases in cycling numbers on cherry picked main commuter routes but say nothing about overall modal share or the slump in cycling among children and other groups. A good 'cycling city' should be able to supply reliable annual modal share statistics both for commuter and general cycling, but such statistics are almost impossible to come by, because they expose the failure and the stagnation which lie beneath the frothy PR.

As a Cycling Town, the city council is dedicated to promoting healthy and environmentally friendly travel. There are cycle lanes across the city, including along the seafront, Grand Avenue and The Drive, Hove to Hangleton, and Lewes Road. Many are part of the national and regional cycle route network.

Our north-south cycle freeway provides a link between the Downs, from the Dyke Railway Trail in Hangleton to the seafront via Hove station. The southern section along Grand Avenue and The Drive is a segregated, motor-vehicle free, European-style cycle freeway.

The Green Party and the local cycling group successfully prevented the now-ousted Conservative council from getting rid of this cycle path (which sounds like a good path, though it does seem to have problems).

Jim Hardy needs to tell us more about Brighton. On the face of it he seems partly underwhelmed.

I have my doubts about the Green Party. Until Friday their biggest power base was Norwich, which is a totally car-centric city with a risible modal share for cycling and streets which are deeply hostile to cycling and walking. Norwich council consists of 16 Labour, 14 Green, 5 Liberal Democrat and 4 Conservative councillors. The Greens ought to be able to exert influence in a scenario like that, but of course you have to have a vision of what’s wrong and how it can be put right.

Cycles are a vehicle and, as such, cycling should, wherever possible, take place on roads


There will be a hierarchy of measures to create this provision. The primary objective of these will be reducing speeds and volume of motorised traffic.

Sounds familiar, does it not?

It certainly fits in with the Green Party’s most prominent cycling advocate in London. Jenny Jones is a cogent and articulate critic both of the murderously car-centric Metropolitan Police and the vacuum at the heart of Boris Johnson’s cycling target. But how would Jenny Jones bring about mass cycling in London? Evidently by extending the dismal farce that is ‘the London Cycle Network’. Plus more niceness. When it comes to increasing London’s modal share Jenny Jones has no more idea of how to achieve it than Boris Johnson or Ken Livingstone.

Jenny Jones, the Green Party’s candidate in next year’s London mayoral elections has called for the city’s black cab drivers to be given cycle awareness training similar to that now being provided to bus and lorry drivers.

her main message...is that cyclists, taxi drivers and those in charge of large vehicles such as HGVs and buses need to develop a greater understanding of each other’s use of the road in order to share it safely and protect bike riders.

Jenny Jones seems never to have said a word anywhere, ever, about the core issue of subjective safety, let alone Dutch infrastructure with a proven record of success.

Brighton and Hove has a very active cycling group, which says it is committed to

A cycle-friendly road network in the City.

Unfortunately that could mean just about anything.

From the beginning there were tensions between two 'styles' of cyclist. There's the fast traveller - head down, go for it, wishes to use the road network as it exists - and there is the leisurely traveller, the one less inclined to mix with traffic who would rather have a network of routes that's separated from the road, and this has always been a barrier within the organisation.

Unfortunately this ‘tension’ ultimately amounts to more than a matter of personal choice. It’s a tension between an approach which has failed (i.e. vehicular cycling on roads crowded with motor vehicles) and an approach with a proven record of success (separation of cyclists from traffic on the Dutch model). It also ignores the reality that the majority of non-cyclists won’t take up cycling if it involves cycling amidst motor vehicles. It’s also a bogus opposition, since it’s a myth beloved of parochial British vehicular cycling campaigners that Dutch cycle paths are slow, and it’s also bogus because the version of segregation it posits is one involving convoluted and circuitous routes away from roads rather than the rearrangement of street space.

Contradiction is equally embedded in the local council’s Brighton and Hove Local Transport Plan. It commits itself

To encourage and enable greater levels of active and healthy travel, such as cycling and walking.

This is the usual cosmetic guff that boils down to nothing at all. The real commitment is car-centric - reducing congestion – and

To improve reliability of journey times for all road users.

That’s meaningless, since a bus lane (to give just one example) inevitably impinges on car flow.

The traffic modelling here is the standard car-centric one of maintaining motor vehicle flow, rather than acknowledging that if you want to deter car use you have to make it less convenient, not more. You won’t ever get traffic evaporation or a modal shift to cycling by making car driving as easy, quick and convenient as possible, especially when ‘easing congestion’ is accomplished at the expense of safe and convenient cycling and walking.

Will Brighton’s new Green council be kicking ass and requiring a whole new transport strategy for the area? There’s a limit to what any administration can do in four years but you can at least make a start. Will it start reallocating street space away from the private car to the bicycle? Will it start building bike grids at locations like Lewes Road which separate cyclists from motor vehicles? Will Brighton’s status as a failed cycling city with a risible modal share start to change under its first Green administration?

I would like to think so. But I have my doubts. And if anyone can prove me wrong no one will be more delighted than me.

All photos from Weird cycle lanes of Brighton. 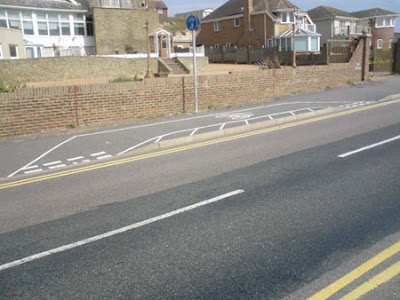 Posted by freewheeler at 14:07