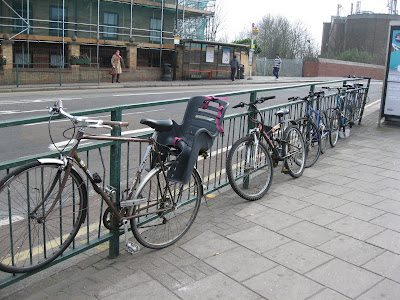 Blackhorse Road station in Walthamstow serves both the Victoria Line tube and the overground Gospel Oak to Barking line. It has 6.179 million passengers per year.

The station is on the corner of a hideous junction which is a testament to the Transport for London culture of putting motor vehicle flow before the convenience and safety of cyclists and pedestrians. Pedestrians have to cross each arm of the junction in two signalled stages, being held at a cattle pen in the middle in the traditional way. The eastbound cycle lane has a dedicated cycle crossing signal, although The Grumpy Cyclist reports being cut-up by a left-hook driver who treated the cycle light as if it also applied to drivers, and in the past I’ve found the light not working. If you are cycling westbound this is the cycle lane at this junction: 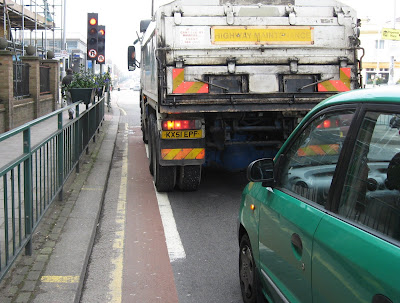 Sixteen months ago I pointed out that Blackhorse Road station has parking for 12 bicycles and 350 cars.

I can now report that the old cycle stands have been ripped out and replaced by new ones. Yes, an extra seven have been included, making a grand total of nineteen in all. 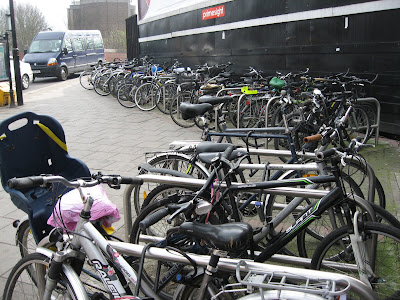 And you know what? It isn’t enough. On weekdays you will often find every single stand with two bikes attached to it. Which means that latecomers have to use the railings outside the station. Even at the most rudimentary level of providing cycle parking, the London Borough of Waltham Forest is crap. 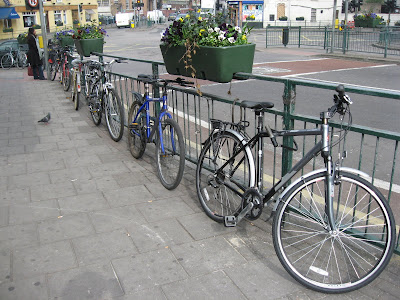 Posted by freewheeler at 11:06