Ken Livingstone comes out against Dutch cycling infrastructure for London

The message about the need for Dutch infrastructure is starting to be heard. There’s a growing grassroots demand for it. But no one in the cycling establishment wants to hear it, and neither do politicians who might be perceived as cycling-friendly. Now we can add Ken Livingstone to the long list of people and organisations determined to maintain London’s car-sick status quo and insist that cyclists should go on sharing the roads with motor vehicles.

Mr Livingstone pointed out that fatalities have decreased over the past decade as the number of cyclists on the roads has dramatically increased.

Not in London they haven't. In London between 1992 and 2006, there was an average of 16 cycling fatalities a year. The trend is not a downward one. And nationally cycling is the one road user group where year after year the number of those killed and injured remains constant, unlike all other groups including pedestrians, where there is a downward trend.

So far this year six cyclists have died on London's roads, making it a fairly average year. Livingstone's basic argument is bogus. Cycling in Britain is stagnating or declining, not growing, and this is as true of London as anywhere else. At best those who do cycle are cycling a few more miles a year than before, and a tiny number of cities can claim a marginal rise in commuter cycling, which is cancelled by the continued decline in cycling by children and the public generally. Nor is it true that cycling is getting safer. Exposure to risk is as great as it’s ever been; indeed, cycling now has a risk 12.7 times as large per km travelled, when it was just 9.3 times as risky in 1981

But he added that action should still be taken to make roads safer.

“In a perfect world, we would have hundreds of miles of segregated cycle routes, but we have to face the reality that this is very difficult on many of London’s roads,” he said.

No one is suggesting the overnight transformation of London. But you could certainly make a start on roads like this five-lane highway for motor vehicles known as Tottenham Court Road. (Note the lane reserved for the parking of black cabs.) 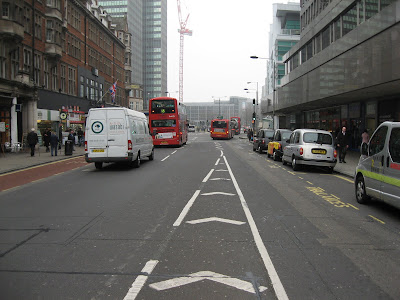 Instead of blathering about difficulties, why not start with the easiest roads? As yet Greater London doesn’t have a single street that matches the Netherlands for cycling infrastructure, and in consequence of that it has a risible modal share which is never going to increase as long as the focus remains on educating and training drivers and cyclists to be nicer to each other. The behavioural approach is doomed to continuing failure. It also nicely serves the status quo by not requiring any changes to the design of London’s streets, which remain devoted to the primacy of the private car, even at the very heart of the city.

“But we can also be more ingenious, with well-signposted cycle routes through quieter back streets.

That’s right, Ken, just like the one where a cyclist was crushed to death by a lorry in Hammersmith less than a week ago, right by a speed table and a blue cycle route sign.

The London Borough of Waltham Forest has lots of well-signposted routes along quiet back streets, and though the traffic volume may be less than on a major road you still encounter psycho lorry drivers, speeding minicab drivers and aggressive boy racers, usually in a narrow tarmac sewer lined on both sides with parked cars. So-called ‘quiet routes’ are also all too often ridiculously circuitous, like the one which runs between Chingford and Walthamstow. ‘Quiet routes’ are a tacit acknowledgement of motorized terror and do nothing whatever for mass cycling. They are a substitute for real infrastructure.

The future for cycling in London remains very bleak, since our next mayor is either going to be Boris or Ken, and they both subscribe to the TfL mindset of smoothing motor vehicle flow and allocating street space for car parking or black cab parking.

Ken Livingstone also subscribes to the idea that economic wellbeing is related to roads and traffic flow, which is why he wants to revive his crackpot scheme for the Thames Gateway Bridge, claiming

One of the reasons you have got much higher levels of unemployment and poverty on both sides of the river in East London is because of the inaccessibility.

Ken is also sucking up to motorists and a-whimpering about their parking needs.

Ken Livingstone: an obstacle to mass cycling in London.
Posted by freewheeler at 13:54