The importance of conspicuity

SHOPPERS in Darlington were mystified by the appearance of a semi-naked woman riding a bike through the town centre.

The modern-day Lady Godiva was spotted at lunchtime today freewheeling down Priestgate.

The woman was wearing only a T-shirt and was naked from the waist down. She was standing up on her pedals and was heard to be shouting I'm invisible as she rode past.

All cyclists are by definition invisible, especially in today’s busy modern world where so many drivers have important text messages to send or read. Even the most skilled multi-tasking motorist cannot occasionally avoid colliding with a cyclist, especially with those criminally irresponsible cyclists who foolishly and dangerously wear dark clothing.

This is why cyclists should make every effort to make themselves conspicuous at all times. This London cyclist (below) demonstrates a key aspect of Cyclecraft which is all too commonly neglected by conventional cycling campaigners – the importance of wearing high viz gear and no knickers. 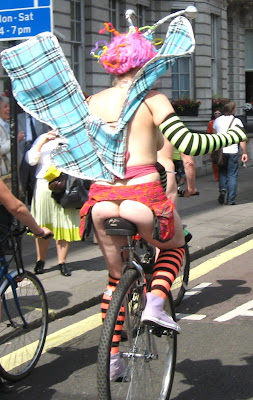 Posted by Freewheeler at 07:16