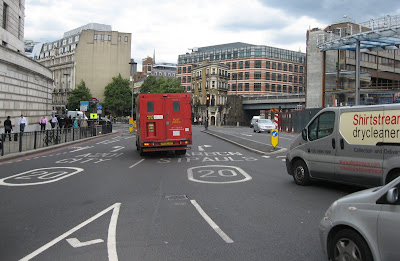 Boris Johnson and TfL are not going to budge an inch:

"My information is that the general speed [on Blackfriars Bridge] is nearer 12 miles an hour, therefore a speed limit of 20 mph isn't necessary and could be a serious impediment to smooth traffic flow," said the Mayor.

Ms Jones pressed the Mayor on why he was ignoring the findings of the report prepared by TfL in 2008. The Mayor replied: "I am told that it does not represent the best advice and therefore I am not pursuing it".

Let’s be clear that this is London cycling’s Tahrir Square moment. And its ramifications are much greater than simply cycling.

Blackfriars is about fighting the dirty, noisy, unpleasant and dangerous car-culture entrenched in our streets and in the minds of our city’s transport policy-makers.

If we win at Blackfriars, it can affect a lot more than just one bridge.

This is a test for London’s cycling community in all its manifestations, because whatever all the other differences are I doubt if there is a single cyclist in London who thinks that raising the speed limit here from 20 mph to 30 mph is a good idea.

I hope the CTC will get involved in this struggle and not just leave it up to the LCC. And also Greenpeace and Friends of the Earth. And Living Streets and Climate Rush and all the other campaign groups.

In the meantime, don’t neglect the conventional channels.

The deadline for responses to Transport for London’s consultation Draft Network Operating Strategy is Friday. This is the document which sets out London Streets’ overall approach to the management and operation of the road network in London… as well as providing a framework through which to prioritise capital investment and ‘business as usual’ operational expenditure decision-making across the road network.

At the moment the strategy is all about cars, vans and HGVs, so it really is important that we get as many responses as possible from people interested in making London’s streets cleaner, more sustainable, more pleasant and less dangerous.
Posted by Freewheeler at 17:12