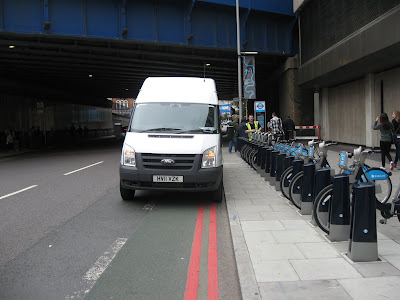 This bike hire van parked in the cycle lane on Southwark Street has received a parking ticket.

Originally delivery and collection of bikes was all going to be done by 'Green' electric carts, but somehow that never quite worked out…

Back to the future:

If we assume that the bike hire scheme really does reach the number of trips that its proponents say, this means it has a capacity to replace one in 400 trips. 0.3% of the total. And that's the best case if they complete the scheme.

That's tiny. Barely a start, in fact. Where people really cycle they use their bikes an awful lot more than that.

Or to put it another way, as things stand

this is the equivalent of the average Londoner going out and returning home again about once every three years by using these bikes.

a residual concern remains who is using the scheme: overwhelmingly white men aged between 25 and 44, many of whom earn more than £50,000 a year. For a scheme that has already cost £79m, with a further £45m for the extension to cover the Olympic Park next year, can we really justify this "posh-boy toy"? "If you look at the normal demographic for cycling, it's exactly the same," says Ranger. "But that will change as we move into year two or three and we see people getting comfortable with it."

So, is London in the midst of a "cycling revolution"? The mayor would say yes, but others are more sceptical. "It just isn't a cycle-friendly city," says writer Will Self, a "bikie" who is mildly disdainful of Barclays Cycle Hire. "I sort of approve of the idea of using crap cyclists to slow down the traffic stream but it's a bit suicidal – like throwing people over the top in some conflict."

Sounds like Will hasn’t heard of safety in numbers!
Posted by Freewheeler at 20:36