Coming soon to a footway near you...

A Government Minister has clashed with BT over thousands of 5ft-high metal broadband cabinets cropping up in outlandish positions in the middle of residential streets.

Paul Burstow accused the telecom giant of behaving ‘outrageously’ after an elderly constituent woke to find one of the green broadband boxes blocking the view from her front window.

Which is somewhat hypocritical since it was a Conservative government which allowed the siting of such objects outside the remit of local councils.

In a civilised society local councils should have been given the power to determine the location of these artefacts. A civilised society would also insist that they be located in the carriageway, on a chicane, to provide additional motor vehicle calming and to provide local residents with some form of compensation for these ugly objects.

The cabinets, appearing across Britain at the rate of 200 to 300 a week, allow a fibre-optic connection to be made between the local telephone exchange and homes and businesses in the area.

Their dimensions vary, but most are 66in high, 47in wide and 17in deep.

BT does not need planning permission, except in conservation areas, to install the boxes.

BT Outreach are also good at obstructing cycling access, like here on Buxton Road, Walthamstow, the other day. Look closely and you’ll see that the van is displaying a blue badge. I think it’s marvellous that people with a severe disability can find employment driving vans, going up ladders and fixing telephone wires, don’t you? Well done BT! 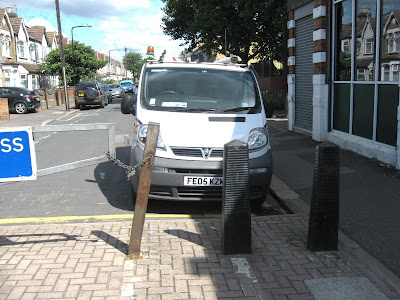 Posted by Freewheeler at 18:17