It Was An Accident 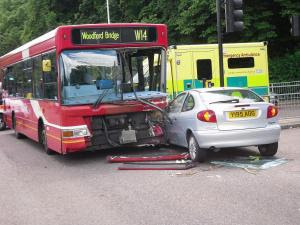 PHOTOS of a collision between a bus and a car at the junction of Hollybush Hill and Snaresbrook Road outside the Eagle Pub show the full extent of the impact.

A pregnant woman was taken to Whipps Cross Hospital with neck pain, while several passengers on the bus were treated for minor injuries.

Ken Wright, 70, of Malcolm Way took photos of the scene.

He said: “I was in my garden when I heard a massive thump.

“Police and ambulances were there very quickly and the road was closed for quite a while.”

Police are treating the incident as an accident.

But as someone remarks in the Comments box under the story

What is the car doing on the wrong side of the road? Looks like the car was trying to turn right, and underestimated the speed of the bus.

This is an extremely plausible hypothesis. The bus was heading north along Woodford Road (A11). The car driver appears to have been turning right into Snaresbrook Road. Provided that the bus driver was not exceeding the speed limit, the car driver was at fault, if this was the manoeuvre. In which case the driver was guilty of a calculated recklessness and should have been charged with a road traffic offence.

Of course if one of the drivers was taken ill or there was mechanical failure, then this was indeed an accident. But I think we can be reasonably certain that those were not the causes. One or both drivers did something wrong; the fault was probably entirely the car driver’s and the bus’s CCTV should have established the circumstances beyond reasonable doubt.

This crash happened not far from the spot where Barry Mannakee died. Although that death has attracted conspiracy theories, the circumstances were unambiguous – a motorcyclist who was speeding collided with a woman driver who emerged from a side road without first properly checking that the road was clear. If you think that such episodes are choreographed by MI5 you need to try cycling. You will then discover that although the roads are full of assassins it’s not personal – they are just people in a hurry.

A much more interesting issue than conspiracy theories involving MI5 is why the security services have never taken any action against ‘Captain Gatso’ and the people behind the Motorists Against Detection website, dedicated to petrol bombing speed cameras. Something which is apparently going to get worse now that Mike Penning, the ConDem Minister for the Slaughter of Vulnerable Road Users, is ordering that the figures for speed camera enforcement be published:

'The police are concerned that certain cameras may be vandalised more than they are now, but that's not a reason not to do it.'
Posted by Freewheeler at 18:20