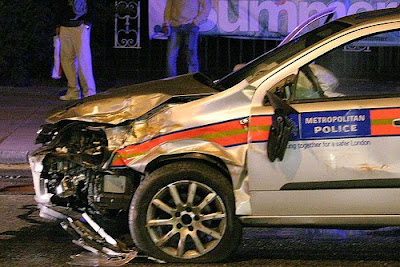 A COUNCIL call for police to enforce Oxford’s 20mph speed limits has been rejected. A senior officer spoke out after Oxford City Council passed a motion urging Thames Valley Police to crack down on speeding drivers.

Liberal Democrat Alan Armitage, who put the motion, said: “It doesn’t say much for the police that they don’t give a damn what the people think.

“It is a high priority for people in Oxford who are worried about protecting themselves and their children.”

Labour leader Bob Price said Beaumont Street and Park End Street were among roads which would benefit from enforcement.

He said: “We don’t expect police to focus all their attention on the enforcement of speed limits but, where you have places where it happens, there is a strong case for them using a short, sharp period of enforcement.”

In April, a police check outside St John Fisher Primary School in Sandy Lane West, found 44 of 110 cars over the limit.

This echoes what happened in York back in March:

City of York Council agreed to introduce a 20mph limit on a section of Fishergate which passes two primary schools,

The Fishergate scheme was opposed by North Yorkshire Police, who said it could make the area less safe and warned its officers would not enforce the limit.

Meanwhile in London, apart from episodes like this, which tell you everything you need to know about how far the rot has gone inside the Metropolitan Police, there’s this:

Dutch towns don’t have tens of thousands of uninsured drivers on their streets and unlike Newham, they don’t have to cope with a quarter of road casualties involving a hit and run driver.

In the nineteen eighties and nineties, the number of traffic police in London was halved. Some senior people within the Met even discussed closing the unit altogether.

The Met’s traffic unit has become very effective as a result of this close scrutiny of their work. One estimate shows they make seven times the number of arrests as the borough police. Given the historic decline in their numbers and the proven efficiency of the section, it is one of the last places the Met should be looking to find savings, yet Traffic is now dealing with a 10% budget cut compared to most sections of the Met who have a 5% cut.

At the last meeting of the Metropolitan Police Authority the Commissioner defended his decision to cut traffic police as the right one, as all sections of the Met were being asked to make savings. This simply isn’t true. The public affairs section, for example, has been given around a £1m of extra funding this year.

Ah, so! The money was needed to pay the sort of guy who earned

more than £1,000 a day to work two days a month as a public relations adviser to Sir Paul.

Sir Paul is a hero of the self-styled Association of British Drivers and Safe Speed (sic). The ABD identifies him as one of the ‘good guys’ (gals naturally don’t come into this masculine topic). Both cite his reluctance to take speeding seriously.

“There is a perception that people who commit criminal offences and who, quite properly and according to guidelines, get a caution, get an easier ride than those who speed at the lower end. Whilst clearly the comparison is not a helpful one, I do nevertheless have some very real sympathy for this perception. Any criminal justice system to be effective has to be seen to be fair. It just cannot be right when people feel that our response within that system is disproportionate.”
Paul Stephenson
Chief Constable
Lancashire Constabulary
2004-03-11

Lancashire's chief constable Paul Stephenson has announced plans for a review of the way motorists are punished. The moves follow a lengthy campaign by the Lancashire Evening Post against the excessive use of speed cameras which won the backing of hundreds of readers.
Authorities in the county, which has more fixed speed cameras than any other in the North of England, Scotland or Northern Ireland, will now operate a "three strikes" rule, where instead of being hit with a £60 fine and three penalty points, motorists who breach the limit only slightly will be cautioned.
A second minor breach would lead to another caution and the offender being asked to attend a speed awareness course.
Only on the third occasion would a fine and points be handed out.
Drivers caught excessively flouting the law would still be subject to the normal punishment.
Mr Stephenson made the announcement yesterday at a meeting of Lancashire Police Authority. He said this system would allow more "discretion" and added: "My post bag is filled and lots of other post bags are filled. Many motorists who have committed offences at the bottom end of the spectrum do feel they have been punished too harshly."

Where does the Met Bus stop, apart from the Town Square Walthamstow yesterday? 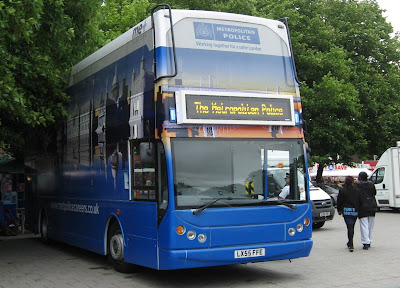 Posted by Freewheeler at 20:03