A cyclist and his ‘improvement works’ 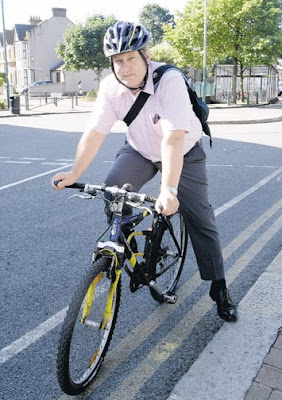 Surfing the interweb I came across this delightful photograph of Councillor Clyde Loakes, the local 'environment' supremo and the man who more than anyone is responsible for inspiring this blog. It’s the only photograph of Clyde on a bike I’ve ever come across. To be honest it looks a bit small for Clyde and suspiciously like one of those made-in-China bikes you can pick up in Halfords for £90. But a mountain bike is a sensible choice for the terrain of Waltham Forest, and those chunky tyres are just the thing for the local glass-strewn cycle lanes.

Many of the improvement works mentioned in this article have already been covered by this blog. Clyde’s idea of improving things for cycling is putting in parking bays alongside cycle lanes and moving the lane closer to overtaking motor vehicles. The Forest Road ‘improvements’ included putting in a pinch point while simultaneously raising the speed limit to 40 mph. But then that was a collaboration with TfL, which explains it.

I recognise the location of the photo. It’s close to Leytonstone tube. Well done Clyde for being able to pose in the cycle lane, as normally it’s blocked by a line of minicabs!

In the background can be seen that marvellous farcility known as Leytonstone bike shed.

Ironically, the spot where Clyde is posing is now also due for Olympic refurbishment. The road closure with cycle access is going to be opened up to motor traffic and the area outside the tube station is going to become ‘shared space’. The local minicab drivers will undoubtedly assist in making this a great success!.
Posted by Freewheeler at 10:01