A MAJOR route through Waltham Forest was partly closed this morning after an accident involving a woman cyclist and an ambulance.

Emergency services were called just after 8.30am to the junction of Lea Bridge Road and West End Avenue in Leyton.

The cyclist, in her 30s, was treated for leg injuries and taken to Whipps Cross University Hospital.

Judging by the photos on the local newspaper's website, the bike was hit from the rear.

This section of Lea Bridge Road was identified by Waltham Forest Council’s 2011 LIP as the one with the highest crash rate involving casualties of any in the borough.

Meanwhile in the City today a tipper lorry collided with a woman cyclist.

Me, I was somewhere else – heading westbound on cycling-friendly Forest Road (A503). Conditions as below. 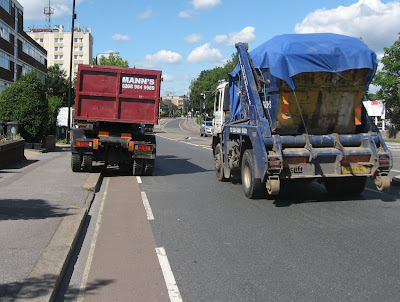 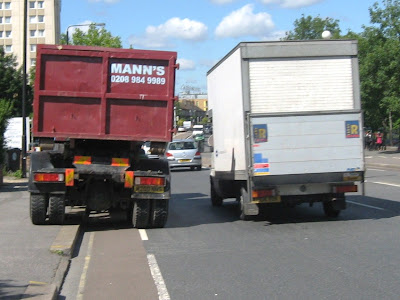 (Below) About 300 metres further on I encountered this car. It frequently parks here, quite legally, because it is displaying a blue badge. Even though this cycle lane is on a major route it is perfectly legal for the driver to park here for up to three hours, then drive round the block and come back and then park for another three hours, ad infinitum.

Some drivers think they can overtake you when you are passing this car, which is why I always pull out and ‘take the road’. Unfortunately a small minority of drivers regard this as a provocation and blow their horns and scream abuse. 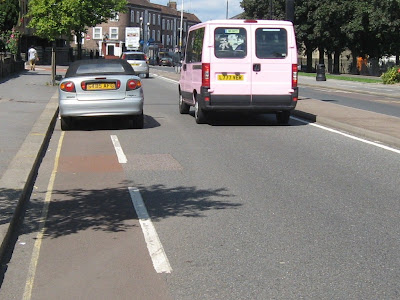 Doubtless the blue badge on this car is legitimate, though in the wider context it is worth bearing in mind that

for the past two years, motorists criminally misusing blue badges have been able to drive around Waltham Forest without running the slightest risk that any action will be taken against them by the only two agencies empowered to act – the council and the police.

The real problem on Forest Road is the infrastructure. It would be perfectly feasible to build Dutch-style cycle tracks on this section of very wide road which carries huge volumes of motor vehicles in and out of London. The same applies to Lea Bridge Road.

Tributes were paid today to a London cyclist who was crushed to death by a lorry as he cycled to work during the rush hour.

It is understood that the lorry was turning left and Mr McGreal was in its blind spot.

Charlie Lloyd of the London Cycling Campaign said: "We're concerned that the junction within the last two years has been turned from a narrow one-way street into a wide two-way street that has become a rat run for lorries."
Posted by Freewheeler at 13:49