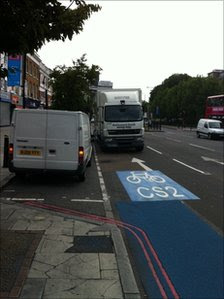 This gleaming new Cycle Superhighway does look super, does it not?

These lanes cost about £10m each and if you haven't seen them they involve blue smoother surfaces and more branding and signage.

Funding is also aimed at businesses on the routes to encourage cycling. 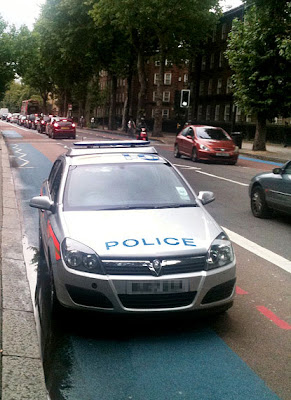 Ten minutes later the pair came ambling back, one carrying a shopping bag from Tesco Express and appearing to check his receipt. The other appeared to be on hand to guard their dinner provisions. The footage was taken on Tuesday at 6.40pm on the northbound lane of Kennington Park Road, showing the patrol car in breach of signed rules stating drivers must not stop between 7am and 7pm, Monday to Saturday.
Posted by Freewheeler at 13:55