I wonder if the blueprint for Go Dutch should be for each borough to improve its A roads to the standards laid down in the London Cycling Design Standards manual - neither TfL nor the boroughs should be able to wriggle out of that, surely? But is it good enough for us?

No (in a word). Cycle tracks with ‘a desirable minimum width 2 metres one way and 3 metres two way’ would end up becoming the norm, not the exception.

Browsing through the manual I came across an example of ‘a seamless transition’ between two types of cycle facility, i.e. a cycle lane which turns into a cycle track. It was illustrated with a photograph of a location I instantly recognised. You can find it on page 73 of the manual (manual pagination), in section 4.2.44 (the fifteenth page of this chapter). 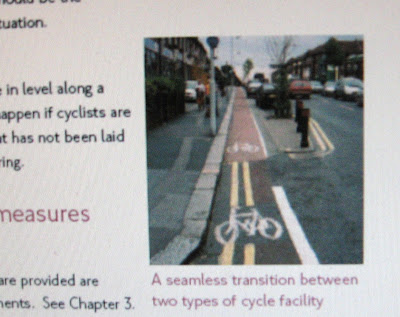 Annoyingly but typically the manual doesn’t identify the locations of any of its photographs. That’s unfortunate because cycling infrastructure often has a wider transport context (as I have suggested in connection with the photograph used by the CTC to illustrate its idea of Cycle-Friendly Infrastructure) or a revealing historical context (as David Arditti has shown in connection with Camden’s cycle tracks).

In this instance the example of a ‘seamless transition’ from a cycle lane to a cycle track is located in the London Borough of Waltham Forest. It is such a marvellous piece of infrastructure that it is even promoted by Waltham Forest Council in one of its cycling leaflets: 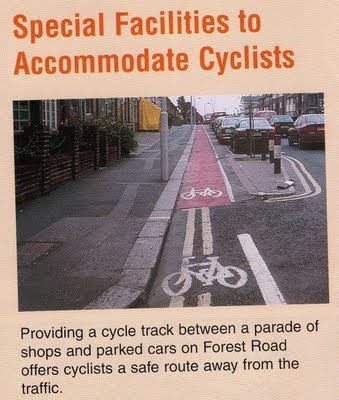 The location of this cycling infrastructure is Forest Road (A503) eastbound, just after the junction with South Countess Road. What are conditions like for cyclists before they make the seamless transition from a cycle lane to a cycle track? The first photograph here will show you (and all the pics in that blog post show locations on this road). Another scene from the eastbound A503 in Walthamstow is shown here.

But leaving aside the topic of subjective safety and narrow advisory cycle lanes on major roads with high volumes of motor vehicles including lorries, there’s something else to be considered here.

The cycle track shown is very badly designed. This infrastructure appears in the design manual to make the rather obvious point that inter-connecting cycling infrastructure ought to have a smooth surface. To focus on that aspect to the exclusion of all others is to prioritise something fairly rudimentary and to ignore all the much greater design failings enshrined in this infrastructure.

For a start the cycle track here is only one metre wide, which raises the question of what it is doing being used to illustrate best practice in a design standards manual which recommends a two metre width as the ‘desirable’ minimum for a one-way cycle track.

Worse, it is located far too close to the adjacent parked cars. The safety zone designed to prevent ‘dooring’ is far too narrow. There is also no physical segregation to prevent cars entering the safety zone or the cycle track. If you look carefully at the council leaflet you’ll see it shows a car which has strayed into the safety zone.

There’s one other thing to mention. This cycle track no longer exists. Yes, this iconic ‘seamless transition’ which TfL is still using in its manual turned out to be a catastrophic failure. Its design was substandard and the council got rid of it. This is what this site has looked like now for several years: 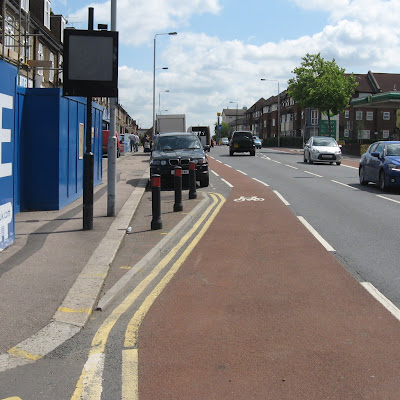 What failed? The design was intrinsically substandard compared to a Dutch cycle track because it was only one metre wide. Worse, the two key reasons why this cycle track turned out to be useless was because it failed to prevent ‘dooring’ on the passenger side and because there was nothing to stop drivers entering the cycle track and totally obstructing it. This is indeed what happened when parking was tight. Drivers who couldn’t find space to park parallel to the cycle track simply parked at an angle, with their bonnets across the cycle track.

The council could have deterred this by the use of parking restrictions, protecting the integrity of the cycle track with a double yellow line ‘no parking at any time’ restriction. It chose not to introduce this rudimentary measure. More effective would have been a physical barrier in the form of bollards. It chose not to use this option either. Instead, it simply threw in the towel, moved the free car parking bays into the cycle track, and diverted cyclists around the re-located parking bays. The re-routed cycle lane has a safety zone supposed to prevent ‘dooring’ on the driver’s side but  (i) it isn't wide enough (ii) it is only advisory (iii) the re-routed cycle lane is not protected by parking restrictions and double-parking across the cycle lane is commonplace, and indeed was occurring two days ago when I took these photographs: 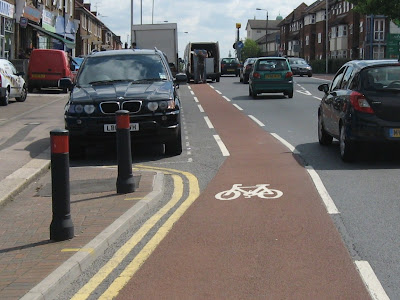 The fact that a spectacularly failed cycle track which falls well below Dutch standards can find its way into Transport for London’s London Cycling Design Standards manual and still be touted as best practice years after it failed and was abolished is oddly revealing, is it not?

The failure of Waltham Forest Council to design an effective cycle track or to respond intelligently to those design failures when they were subsequently exposed is also very revealing of the low value which is attached to cycling infrastructure by local authorities.

A certain sort of cycling campaigner would doubtless argue that this episode proves that cycle tracks don’t work. The reality is that sub-standard cycling infrastructure doesn’t work, whether off-road or on-road. The replacement cycle lane is every bit as mediocre as the original cycle track.

By the way, if you look closely you'll see an advisory flashing speed sign has been installed at this site since it was converted from a cycle track to a cycle lane. It acknowledges the problem with speeding vehicles at this 30 mph location, which makes you wonder who thought it was a good idea to divert cyclists out into the face of speeding drivers. The sign appears to be broken and my impression is that it has not worked for many months.
Posted by Freewheeler at 09:06