The car-centric legacy of the ‘Green’ Olympics 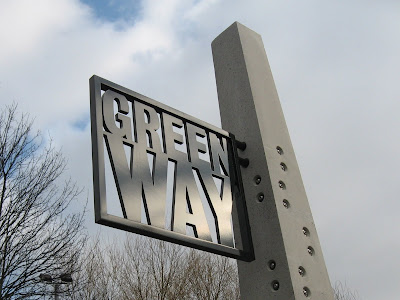 Millions of pounds have poured into the five Olympic boroughs of Newham, Tower Hamlets, Hackney, Greenwich and Waltham Forest. New transport links have been built; old ones have been upgraded.

For many local people, the park is a cause for rejoicing. "Everyone's excited," said Samira, 15. "It's kind of bringing communities together."

That is one view. It is not Iain Sinclair's. The writer and present-day Cassandra from Hackney has declared war on the Olympics and all it – in its modern incarnation – stands for.

Dismayed by the temporary removal of beloved parts of the community – allotments, for instance, and football pitches – and repelled by the vision of a Westfield shopping centre springing up next to the stadium, he feels nothing but despair. "The Olympics have just been a huge engine for pushing through the corporate developments and the remaking, the rebranding of the whole area; it's been the thing that's made that happen faster," he says, adding: "Basically it's a conjuring trick to generate financing for a perpetual state of building and enclosure and an alphabet soup of crazy quangos that are telling you how wonderful everything is and talking up a spurious legacy which is in reality just a huge Australian shopping mall."

A disgruntled Waltham Forest resident adds in the Comments (it’s worth quoting in full):

Millions of pounds have poured into the five Olympic boroughs of Newham, Tower Hamlets, Hackney, Greenwich and Waltham Forest.

Well, maybe the first four, but certainly not Waltham Forest, one of London's worst-run and sleaziest boroughs. The area of Hackney Marsh football pitches in the borough has been taken for a coach park, a much-used recreation ground has been handed over to the Olympics for portacabins, leaving schools without play space, and will probably be built on afterwards. The already-congested Leyton High rd is to be narrowed, to offer wider pavements to Olympic visitors, but nothing is being said about restitution afterwards. Leyton is a dangerously congested station, but nothing will be done to remedy this, and locals fear an Ibrox event. Whatever the outcome of the shenanigans over the stadium, we will almost certainly lose our local football team, to whose requirements the Council has been strangely generous in allowing residential development at the ground. The pitch will probably be housing in a few years time. £1 million is being spent to tidy a Potemkin walkway from the tube to the stadium, and we have just been given a list of the roads we shall not be able to use during the games. The Olympics feels more like an occupying army than an exciting cultural event, plundering what little we have here, and sending us the bill into the bargain. Its only merit is to make it absolutely clear that our rulers do not have our interests at heart.
It's depressing but not surprising to see the Guardian recycling Olympic PR as journalism, when consultation of our local paper could give the real picture.

Or indeed a local blogger. Because this is one of the car-sick gateways to the Green Olympics, an event which is doing nothing for conditions for cycling in Stratford. But then who would really want to cycle to the Olympics on fantasy Greenway cycle paths. Stratford's soon-to-be-opened Westfield shopping centre will have parking for 5,000 cars.

By the way, at the base of that stylish Olympic Greenway sign at the start of this post can be found graffiti, an empty cider can, and lots of little green bags containing shit. Which seems symbolic. 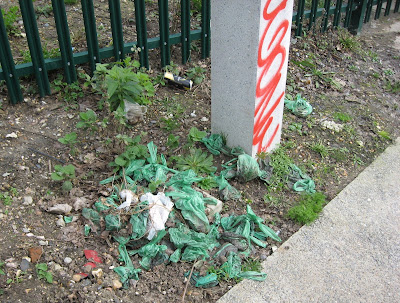 Posted by Freewheeler at 12:41