Cycling on the pavement in Chingford

The A112 is the central north-south transport spine for motor vehicles in the London Borough of Waltham Forest. It runs from Chingford Green in the north through Walthamstow and Leyton all the way to the northern perimeter of the Olympic site and Stratford.

This road is deeply hostile to cycling, in a variety of ways at a variety of locations. The deterrents to cycling include proximity of overtaking motor vehicles, sub-standard poorly-maintained cycle lanes, speeding drivers, pinch points, a mini-gyratory, cycle lanes placed immediately adjacent to parking bays, motor vehicle congestion which also delays cyclists, obstruction of cycle lanes, both permissive and transgressive, and issues of personal security at the Crooked Billet underpass.

On the border between Chingford and Walthamstow cyclists using the A112 are diverted through the Crooked Billet underpass system, where the cycle monitoring figures tell their own story: for the successive years 2006-2010 the counts over a twelve hour period in July were 309, 324, 294, 223, 228. Back in 1998, when the counts were taken in October, the figure was 335.

The council used to record counts for the A112 but stopped doing so several years ago (the 2005 LIP promised extra cycle counts at new locations; with characteristic cynicism the council then subsequently reduced the small number of monitored routes by two).

No one involved in ‘encouraging cycling’ in the London Borough of Waltham Forest seems at all interested in even acknowledging the spectacular failure of cycling in the borough (where the modal share is less than one per cent), let alone addressing it, diagnosing it, and seeking a solution.

This is a preamble to a sight I saw recently on the A112 in Chingford. A woman cycling on the pavement: 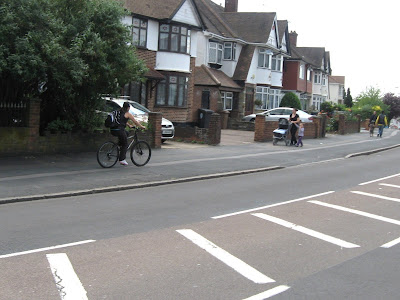 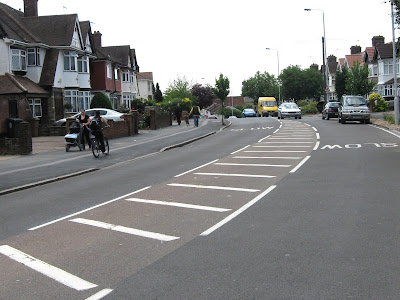 Why was she cycling on the footway? Probably because it felt safer. If that was her motive, it was not unreasonable. The A112 is nominally a 30 mph road but there are no restraints on speeding other than traffic congestion and signalled junctions. Lawless speeding is a particular problem on this section of the A112

Another reason why some cyclists might feel safer cycling on the footway rather than the road is the existence of pinch points. The London Borough of Waltham Forest specialises in putting in murderous pinch points on roads across the borough, including those which are laughably identified as cycling routes. This is what I’d stopped to photograph when I saw her ride past. 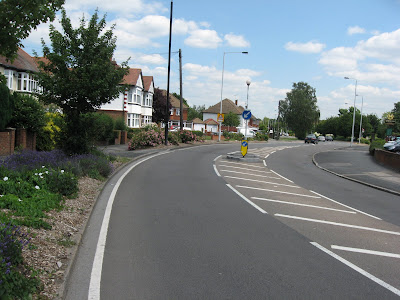 A pinch point like this simply engineers conflict with cyclists. There isn’t space for a driver to safely overtake a cyclist, but if you take the primary position you may experience someone blowing their horn and screaming abuse. Note the way drivers veer over towards the kerb when they pass the pinch point (below).
As a major cross-borough route, the A112 needs a segregated Dutch-style cycle track along its entire length. Instead, the council is currently re-engineering lengths of it in Leyton to make it even more attractive for car use and car parking. And no one seems remotely interested in understanding why cycling is a deeply unpopular travel mode in what is a very compact but profoundly car-sick borough. 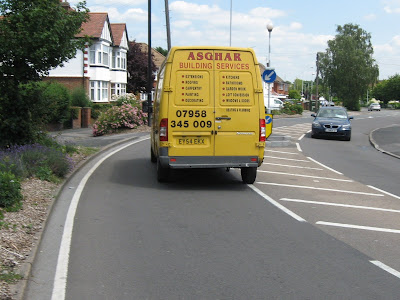 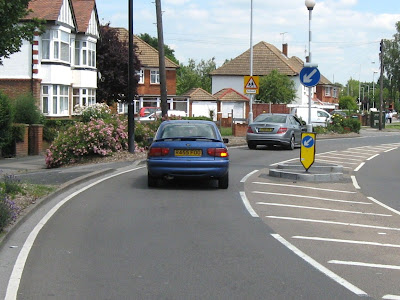