‘Cabbies and cyclists have a common cause’

Cabbies and cyclists have a common cause re access to the #ORN & should campaign and lobby and protest together.

And as anyone who has ever been on London’s Critical Mass will know, black cab drivers are just natural allies, are they not? They always want to join in, blowing their horns in solidarity and sometimes even jumping out of their cabs to engage in a vigorous discussion about the best use of road space.

A reserved lane just for black cabs and cyclists and Olympians in limos. What a marvellous mix that would make. But, hey, you can try that idea out any day on Euston Road! See if you can spot the cyclist. 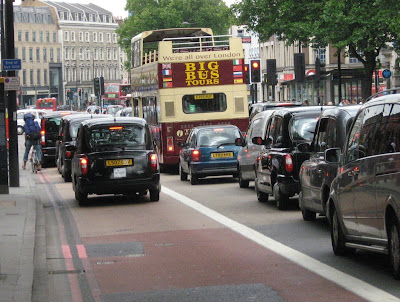 Shortly after I took the pic above I heard a siren wailing. Look carefully in the photo below and you’ll see a yellow emergency ambulance. Its blue light was flashing and its siren was wailing. The ambulance was stationary. It was held up by congestion. Obviously the preferred TfL solution here would be to reduce crossing times for pedestrians, because after all that’s what 83% of pedestrians want. And as many top cycling campaigners will tell you, on London's narrow streets there just isn’t the space for a separate Dutch-style cycle track – anyone can see that. 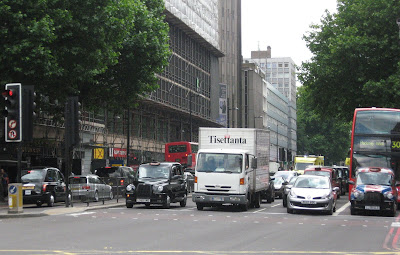 For some strange reason Euston Road is one of the most polluted areas in London. (Note that Boris Johnson's Air Quality Strategy includes the brilliant 'Changing signal timings to smooth the flow of traffic'.) On Wednesday there will be a protest.
Posted by Freewheeler at 10:17