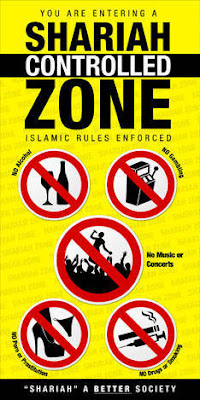 There was a controversial march from Leyton to Walthamstow yesterday. This was preceded by a spot of flyposting asserting that Waltham Forest is ‘a Shariah Controlled Zone’. Apparently there’s a name change in the offing. No longer will this slice of north-east London be known as the London Borough of Waltham Forest: The radical - an electrician called Trevor Brooks before converting to Islam - said last night: "It would be changed to the Islamic Emirate of Waltham Forest.

The Shariah poster strikes me as car-centric. There is nothing about misuse of blue badges in Waltham Forest, which is currently at epidemic proportions thanks to the total indifference of the crap police and the crap council. This is where Shariah law could prove very useful. Anyone found mis-using a blue badge would be sentenced to having their arm chopped off. This, I believe, would end such mis-use at a stroke (literally!).

What has this got to do with Walthamstow’s MP Stella Creasy, you ask. Well, while the march was going on this blog went instead to the Saturday afternoon craft fair at the social club on Orford Road. And who should be there, shopping, but Dr Creasy. This was a bit of a surprise, since you’d think an anti-fascist campaigner would be down there in the town centre rallying people against the EDL’s counter-demo.

This blog was able to witness this episode.


Woman behind stall: ‘Are you Stella?’

I am pleased to report that Stella ordered a cushion (she wanted a grey one and that colour wasn’t available on the stall. As I am not a psychologist I am not going to speculate what a liking for the colour grey signifies.) It’s good to see an MP ploughing money back into the local economy.

I have one other piece of news about Stella. I am sorry to say that she now totally denies this scandalous episode. It never happened, she insists. Don’t trust bloggers.

It’s enough to make me want to buy a helmet cam!

It now occurs to me that the woman I saw at the craft fair cannot possibly have been Dr Creasy. My sincerest apologies. Don’t whatever you do trust a blogger. We are mad and we fib.
Posted by Freewheeler at 09:57