A fairly typical opinion to be found on cycling discussion threads and in comments boxes:

Segregated cycling (especially in somewhere like London) is little more than 'pie in the sky,' there is little enough room as it is for cars and pedestrians, to divide that space up further will be far too costly and cause far too much disruption. Shout all you like but no government will ever go for it.

And while the argument that there isn’t room on British streets for safe, convenient cycling infrastructure continues to be asserted (no matter how often it is disproved), these streets are being carved up in ways which make cycling worse, not better.

This is what’s currently happening in Russell Square (north side). A new segregated cycle track? I’m afraid not. 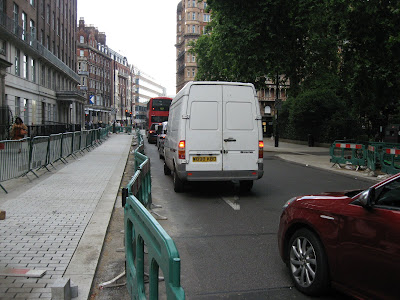 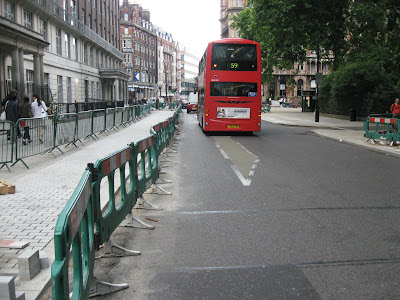 The footway is being widened and cyclists are being forced closer to motor vehicles.

The works are part of the Bloomsbury Corridor project that also covers Woburn Place, Tavistock Square and Russell Square. It’s an area that has become dominated by motorized road traffic and the idea is to make it safer for pedestrians and cyclists, as well as drivers.

Just round the corner is Woburn Place. A street which is five lanes wide. One lane is dedicated to free parking for just a tiny handful of black cabs. Woburn Place turns into Southampton Row, where earlier this week a massive articulated lorry ran over a cyclist in circumstances which are currently unclear. The Bloomsbury Corridor project does nothing at all to keep cyclists apart from huge lorries or other motor vehicles, it does nothing to stop rat-running through Russell Square, and it does nothing to deter or reduce the huge volume of motor traffic using these streets. 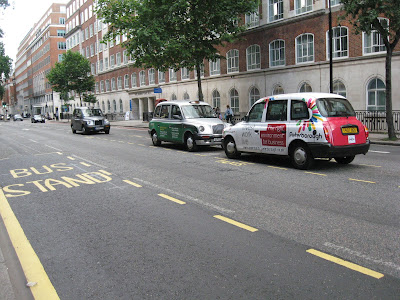 Meanwhile in the London Borough of Redbridge

NEW proposals to bring about a ‘step change’ in cycle use in Redbridge are to be discussed at council meeting on July 18. Redbridge Council recently received a grant of £385,000 from Transport for London to promote cycling in the borough.

And as part of plans to put the money to use, councillors will consider proposals for new cycle routes on many of the borough’s roads.

The Council has set a target to increase the number of journeys made by bike in the Borough from the current 1 percent level to 1.5 percent by 2013, in line with the Mayor of London's strategic goal to get more people cycling throughout London.

This ‘step change’ for cycling is a self-evident fantasy, since the capital sum involved is derisory, some of it will probably be creamed off for promotion (‘encouraging’ and ‘celebrating’ cycling) and the rest will go on infrastructure. The question is: what sort of infrastructure? The answer is cycle lanes painted on roads. In other words, a strategy which accommodates cycling to the presence and convenience of motor vehicles, not the other way round. And while many cycling activists continue to insist that there just isn’t the space for Dutch infrastructure, in Redbridge they are managing to find it – for extra free car parking, on the Woburn Place model. This is Baron Gardens, Redbridge. A street where residents enjoy private off-street car parking and the council obligingly supplies even more, in the middle of a very wide street. 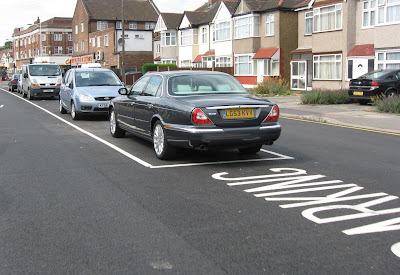 Next door in Waltham Forest they have an even better idea. Converting footways and cycle lanes for free car parking bays. Wood Street E17. A model which is being rolled out across the borough.

Things are getting WORSE, not better. 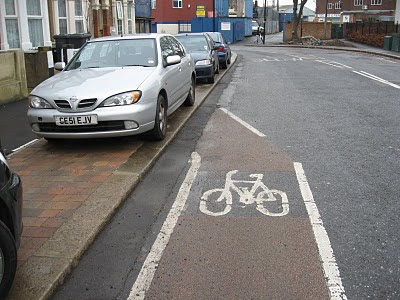 Posted by Freewheeler at 10:33