Conditions for cyclists on Vernon Place

These are the conditions for cyclists just before that fatal junction is reached. 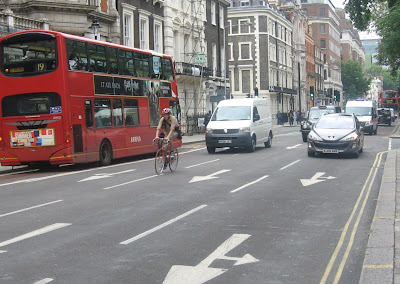 London’s so-called cycling revolution is largely made up of cyclists like this: confident, fast cyclists who are usually male, usually white, and usually in the age range 25-45. They are also usually professionals. Often they will be riding road bikes with skinny tyres and dropped handlebars.

The problem is, this kind of demographic restricts cycling to a fringe minority. And even assertive cyclists who take the primary position can end up experiencing problems.

The answer, as we know from extensive international experience, is the provision of facilities that separate cyclists from fast and aggressively-driven motor traffic. Training cyclists to pretend to be motorcyclists is not the answer.
Posted by Freewheeler at 17:22