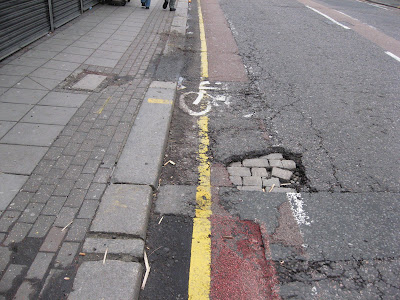 Waltham Forest Council has been one of the leading local authorities in London in its commitment to introducing cycling facilities over the past decade. From 1991 when it first agreed the London Cycle Network to be on most of its main roads, the Council has regarded cycling as a key mode of transport to be integrated into all its road schemes. By 2003 almost all main roads in the core of the borough had cycle lanes (20 miles) and a substantial network of quiet routes (also 20 miles) using residential roads and park land was also in place. The Council has won two awards from the LCC (London Cycling Campaign) for best cycle route, (Forest Road and Orient Way) two awards for its Bike to Secondary School Scheme and one for its bike recycling centre opened in 2003 and run jointly with the local LCC.

And this is how cyclists are sometimes integrated.

Shall we take a closer look at the pothole repair in the photograph above? Yes, a crack team from Environment & Degeneration has filled up the pothole with loose bricks. Sadly, they ran out before the jigsaw was complete. (It's on Markhouse Road E17 between the junctions with Downsfield Road and Low Hall Lane if you happen to be passing that way with some spare aggregate.) 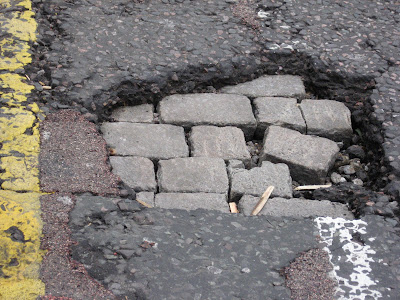 On the award winning Forest Road cycle facility the Council has thoughtfully placed a litter bin for the benefit of passing cyclists: 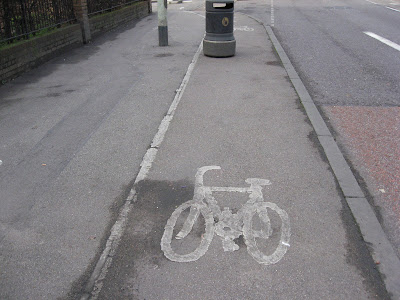 A few whingers might complain that a section of the award winning Orient Way route has half-vanished under slimy, slippery moss, in that section which involves two slopes which meet at a blind corner. I'm afraid some people are just never satisfied. 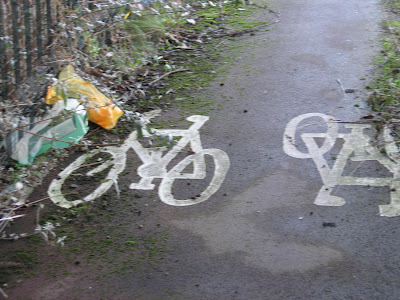 Posted by freewheeler at 08:26