At a national level the same mass media which marginalizes death on the roads regularly runs anti-cyclist stories.

There was one recently in the Daily Mail. Lady Sharples boasted of assaulting a cyclist: “: "I had a bag and I swiped him. I did not hit him hard enough.” Lord Bassam, a government transport minister remarked, “I think she probably did the right thing.” Needless to say a cyclist who assaulted a driver who had just missed knocking her off her bike could expect to be arrested and charged with assault.

But to the Mail Lady Sharples’s remarks

reinforced calls for laws requiring cyclists to put registration plates on their bikes.

The Mail reminded us that

London Mayor Ken Livingstone has sought to clamp down on dangerous cyclists with police issuing £60-on-the-spot fines for riding on pavements or jumping lights.

That’s the same fine given to a reckless driver using a handheld mobile phone.

Tory MP Mark Pritchard urged ministers to consider a registration plate system for bikes to make it easier to identify cyclists riding dangerously. He said: "Cyclist etiquette would improve if they could no longer remain anonymous."

A registration system for cyclists is in reality totally unworkable. If one was introduced it would undoubtedly involve a fee, and it would either be ignored by many cyclists or, if rigorously enforced, it would result in a massive slump in the numbers of people cycling. Because of these two factors I don’t think there’s the slightest possibility of cycling registration plates ever being introduced.

The DailyMail story also looks a little silly in the light of today’s news:

The Driver and Vehicle Licensing Agency risks becoming "a complete laughing stock" after it emerged nearly 40% of motorbikes were untaxed, MPs have said. Evasion rates among all road users rose to 5% in 2006-7, costing taxpayers £214 million, up from 3.6% in 2005-6. The Commons Public Accounts Committee urged the DVLA and Department for Transport to "strongly consider" tougher measures to tackle evasion.

Chairman Edward Leigh said the DVLA's efforts to deal with it were "poor". His committee said the agency should consider impounding untaxed motorbikes and imposing penalty points on tax-dodgers.

Mr Leigh said: "The DVLA's performance in tackling persistent evaders of road tax has been poor. "The agency and Department for Transport must work with the police and local authorities to tackle offenders actually out on the road, rather than simply by using paper records. And ways of using new technology to detect evaders must be vigorously pursued. The alternative is an ever increasing belief among road users that the evasion of road tax is a low risk activity."

Unfortunately because governments, the police and the criminal justice system have traditionally indulged drivers, most forms of criminality on the roads are a low risk activity.

On Cairo Road E17 this blatant form of footway parking has continued now, permanently, for over a fortnight at least. I don't know whether the parking attendants aren't issuing it with FPNs or whether the FPNs are being ignored because the machine is not taxed and the owner is untraceable. 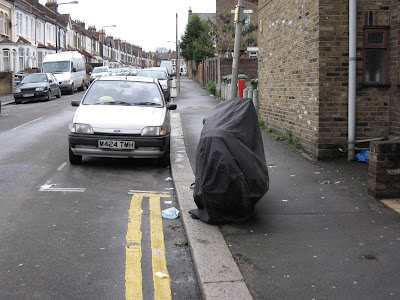 Posted by freewheeler at 11:20