Yobs, binge driving and the judiciary

of a generation apparently out of control.

“We are living in a society which is bedevilled by wild feral youths such as you. Before we plunge into even greater violence at the hands of lawless and irresponsible youths it is time for us to address the problem. It is time for parents to resume control over their offspring. It is time for parents to teach values and respect to their children, value and respect for other people and not allow their offspring to engage in selfish and irresponsible behaviour. It is time for the police to be released from administrative tasks and red tape and be once more a visible 24-hour presence on our streets, particularly in our violent hotspots.”

The violence, lawlessness and irresponsibility of youths are tiny compared to those of adult drivers. Teenage yobs do not kill 3,500 people a year. Drivers do. We hear a lot about binge drinking but we never hear about binge driving - the dangerous addiction to car dependency and reckless driving. And yobbish binge drivers can always rely on their dear chums, the judiciary.

The threat of jail was lifted yesterday from drivers who kill while at the wheel without a licence or insurance. New rules for judges said that those among the army of illegal drivers on the road who cause death should normally escape with a community punishment. Even repeat offenders - who have a previous conviction for going unlicensed or without insurance - can avoid imprisonment under the instructions for the courts on how to deal with drivers at fault in fatal accidents. The ruling handed down by the Sentencing Guidelines Council, the body that sets punishment benchmarks for judges and magistrates, frees millions of illegal drivers from the risk of imprisonment if they kill. The Council, led by Lord Chief Justice Lord Phillips, made its decision despite carrying out a survey that found a big majority of the public think sentences for serious driving offences are too light; that families of victims of killer drivers are "deeply unhappy" about light sentences; and that most people believe driving without insurance or licence is a very serious offence.

So that’s years of campaigning by RoadPeace down the drain...

Our legal system bends over backwards to accommodate prospective or actual killers at the wheel. Thus

A BUSINESSMAN convicted for talking on his mobile while driving at 156 mph has admitted using his phone behind the wheel again. Ronald Klos, of Sandport, Kinross, was previously banned after clocking the highest speed ever recorded in a car on a British road.

He was arrested again months after having his licence returned, and yesterday at Perth District Court, he admitted driving while using his mobile phone near his home on 7 July 2007. He was fined £60 and had three points imposed on his licence.

Judges are enormously sympathetic to yob drivers. Every week there are disgusting cases like this.

The judiciary’s sympathy and understanding of yob drivers is boundless:

A road rage driver has escaped with just a fine after he drove along a pavement in a city centre. The hot-headed motorist scattered shoppers as he belted down a 12 foot gap between shops and bus shelters after a foul mouthed tirade with a bus driver. Shoppers had to leap for their lives as Korey Rowett drove on to the pavement along Royal Parade in Plymouth city centre - and it was all caught on dramatic CCTV. But a judge let him off with a fine after telling him that he was satisfied that none of the public were placed in "undue danger".

Yob politicians also get slapped on the wrist with a feather.

No surprise that the David Cameron has jumped on the bandwagon.

Last year there was the case of a yob who drove dangerously when he accelerated through a red light and knocked down a pedestrian on a pelican crossing, a court has heard. Jurors heard his high-performance BMW 6 series car reached 47mph as he overtook vehicles in the wrong lane just before traffic lights in Bolton town centre.

While on bail for this offence this same yob drove at speeds of at least 140mph on a stretch of road known as Death Valley…The boxer was convicted of speeding but escaped with a £1,000 fine and a 42-day ban because police were unable to prove how fast his high-performance BMW 630i was going. A police officer told a court his speedometer was "off the clock" at 155mph as he pursued Khan on the M62.

This particular yob was chosen by David Cameron as his “person of the year” because there is “much to admire in the man.” In fact according to Cameron this yob represents social responsibility in action.

Let’s forget for a moment Cameron’s personal association with violent yobs. Let’s concentrate instead on his hypocrisy as a Green. Here are some instances:

(i) Plans to force shoppers using out-of-town supermarkets to pay car parking charges have been given the thumbs down by David Cameron even before they have been formally launched.

(ii) a road-building programme was still necessary because "some extra road capacity" was needed.

(iii) He is keen to extol the benefits of public transport, on Thursday he was pictured taking a train in Bury, although admittedly it did take a helicopter to get him there… In 2005 he voted against the Clean Neighbourhoods and Environment Act, legislation that gave local councils more power to take direct action against litter, graffiti and environmental problems.

(iv) He has taken 70 private flights since becoming party leader nearly two years ago. The revelations make a mockery of his claims to be a keen environmentalist worried about climate change.

(v) A spokesman for the Tory leader said the party had never made any secret of the fact that he was followed by car. "David Cameron has always enjoyed cycling and if he could carry all of the boxes of documents for work on his bike then he would," he said.

Pathetic. A phoney like Cameron has no idea what you can get on a bike. 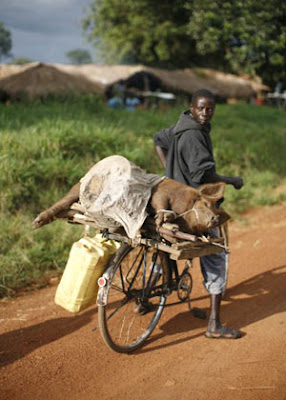 Posted by freewheeler at 14:10