Do you know what I’d like to do? I’d like to magically transport Councillor Bob Belam “Portfolio Holder, Environment and Regeneration” and Mr Martin Esom, “Executive Director of Environment and Regeneration” to Forest Road, Walthamstow (which happens to be one of the longest and busiest roads in the Borough). Then I would blindfold them and give them a white stick and make them walk.

I’d like to make them walk here. This was the state of part of the footway on Forest Road back in September: 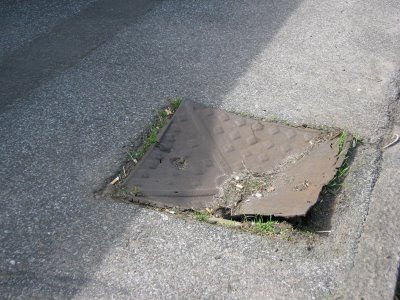 I wrote about it at the time.

And this is the state of the same part of the footway four months later: 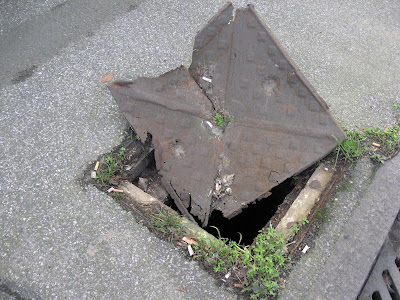 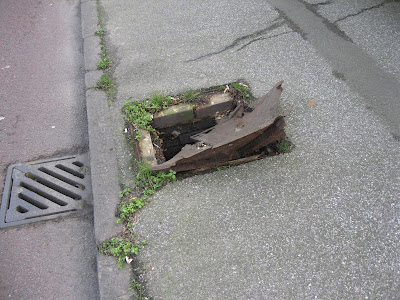 Now Councillor Belam knows this blog exists. If he was doing his job properly he would have had this cover fixed. He’s not and he hasn’t.

Let’s imagine that our blindfolded pair encounter this razor sharp rusting hatch, slash their legs open on it, and then put one leg down the hole and break it. Then I would read to them what it says on the Council's website:

Our aims: To inspect all roads and footways regularly to make sure they are maintained to a safe standard. The items inspected include condition of footway, carriageway, white lining, guard-railing, street nameplates, street lighting, street signs, highway drainage, street trees and grass verges.

But since this blog lacks magical powers to transport them to the more dangerous parts of the empire of neglect over which they preside and ask them for a more precise definition of 'regularly' and 'a safe standard', you’ll just have to ask them yourself:

cllr.bob.belam@walthamforest.gov.uk
Posted by freewheeler at 08:57