Town Hall celebrates The Year of the Rat!

2008 is the Year of the Rat. And the Council has hit the ground running in celebrating it with this marvellous collection of filth, which is at the side of Farnham Avenue, right next to the Town Hall! Yes, in actual view of the Town Hall grounds and just a moment’s walk from the offices of esteemed Leader of the Council, Cllr Clyde Loakes, and Cabinet Member for Environment, Cllr Bob Belam.

A spokesperson for the rats of the London Borough of Waltham Forest said, ‘The expanding vermin population of the area would like to thank Clyde and Bob for the tremendous effort they have put into ensuring that litter bins are allowed to overflow on a regular basis on local streets and for the intoxicating Third World squalor which forms such a striking feature of the neighbourhood. On behalf of the Borough’s rats, mice, pigeons and foxes, I’d just like to say: well done! Keep going with those budget cuts!’ 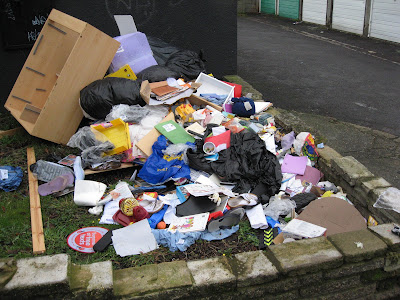 Posted by freewheeler at 10:51