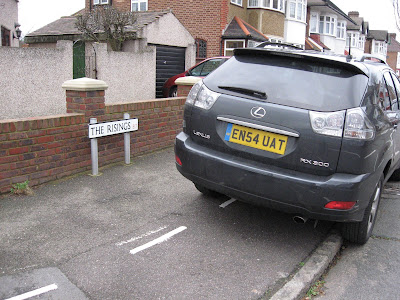 Making pavements fit for gas guzzlers. This house on The Risings E17 has a drive and a garage. The Council has cleared the way for the acquisition of up to three more vehicles by permitting footway parking. And naturally if you bow down to the 4 X 4 brigade, they will take even more space than they are allocated...

The Council beseeches residents to ‘Help us tackle climate change’ (p. 5, wfm, January 14 issue). It grandly announces that it is working on a ‘climate change strategy’ with its ‘partners’ (including this outfit, perhaps).

This is characteristic impudence and hypocrisy on the part of a Council which month by month, year after year, snatches more and more pavement space for car parking, by so doing promoting multiple car ownership and use at the expense of non-car owning households. Cars so physically dominate our streets, including hundreds of local pavements, that it is easy to forget that nearly half of us in London don’t even own a car.

But now this rush to turn more and more space over to car parking has upset car owners! This is naturally a very serious matter.

RESIDENTS were shocked to find new pavement parking bays blocking their driveways. Council workers were re-marking the parking bays in The Risings and Salters Road, Walthamstow. But instead of merely repainting the existing bays, they put two dotted parallel lines all the way along both streets.

In a letter to residents received after the lines had been painted, the council said the move was allowed under new legislation, enabling authorities to bring in two different styles of pavement parking.

It went on to say that the council had originally decided to implement option 1, called "continuous parking." The letter explained: "Anyone can legally park across your driveway, blocking you from getting in or out of your drive. Neither we (council/NCP) or the police would be able to act in either of the scenarios above, even if the vehicle was parked for an extended period of time, unless it was not road legal."

Not surprisingly the residents were not happy. They contacted the local paper, protested to the Council, and ‘Continuous parking’ was immediately cancelled on these streets. But only for the benefit of car-owning residents. The rest of the pavement remains for drivers, not pedestrians.

One of the interesting things about transport policy in this Borough is how secretive it now is. In the past a lunatic proposal like this would have had to be presented as a proposal to the Highways Committee. Residents would have had the opportunity to put their views to their Councillors and attend a public discussion of them. Now transport policy is decided behind closed doors. Officers present a proposal to Bob Belam, and he nods it through. Anyone affected by it is not consulted. The first you learn of changes on your street is when contractors arrive to implement them.

In this instance, the Council’s sensitivity to car-owning residents is not matched by a similar sensitivity to pedestrians. It’s clear that this crazy new policy of ‘Continuous parking’ is being applied to pavements where there are no drives. Whole new tracts of pavements are being seized for the benefit of residents who wish to acquire a second, third or fourth car, and who have nowhere else to park it but the street. Markings are being introduced for the benefit of multiple car owners and for those who choose to acquire big, wide vehicles (such as 4 X 4s) wholly unsuitable for residential streets.

In the case of streets like The Risings and Salters Road the question should be: why have pavement parking at all? Houses here have drives and garages. Pavement parking exemptions simply legitimize buying a third, fourth or fifth vehicle and being allowed to park it on the pavement.

There is also the question of enforcement. Parking attendants put most of their effort into shopping centres and CPZs. Quiet residential streets outside these zones receive much patchier enforcement. Sunday enforcement is much lower than on weekdays. And the lesson of footway parking exemptions is that no matter how much pavement you give to drivers, some of them always want more – and will take it. 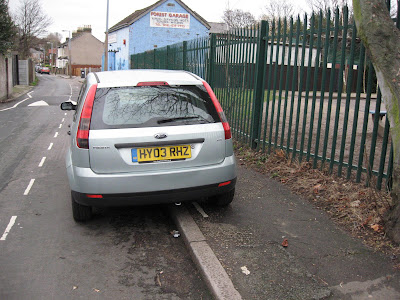 Forest Road, E11. Outside the primary school.
Posted by freewheeler at 09:04