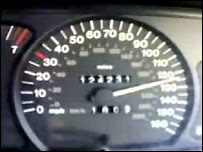 A motorist who filmed himself driving at speeds close to 125mph on a motorway and then posted the footage on the internet is being sought by police.

The real question, of course, is why, when the maximum speed limit is 70 mph, cars are designed to go at speeds of 160 mph. It seems to me that car manufacturers are guilty of conspiracy to commit violent disorder. It’s a pity that well-heeled organisations like Friends of the Earth and Greenpeace have never attempted a private prosecution.

I once had the opportunity to put this question face to face to a government minister. The reply was that as there are no speed limits on German autobahns it would discriminate against British drivers who take their cars to Germany.