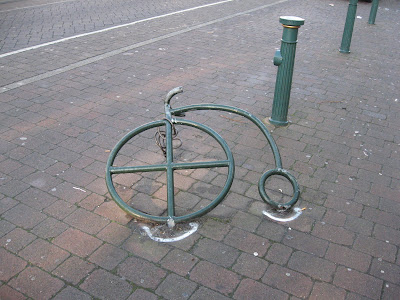 This stylish cycle stand in High Road Leytonstone has been flattened. The dangling cycle lock suggests that someone once had their bike stolen from it. And then at a later date something gave the stand a major bash. Almost certainly a heavy goods vehicle. And if lorry drivers can do this to fixed objects on the footway it’s hardly surprising that some of them manage not to notice cyclists and kill them.

The bad news is that the road haulage industry, which is an influential component of the road lobby which has shaped transport policy for decades, wants even bigger lorries:

As a cyclist in London, I am acutely aware of the menace posed by existing large trucks and, in particular, the murderous "bendy-buses" beloved of the current regime in the capital. Anyone on two wheels - or two legs for that matter - caught between a large articulated vehicle and the kerb is in danger of being turned into mincemeat.
Posted by freewheeler at 18:41