How the Council fails the disabled 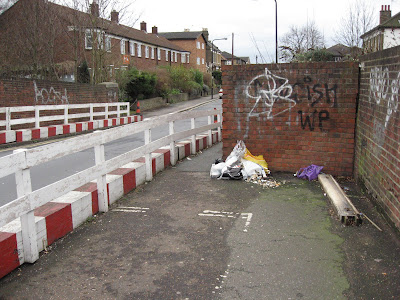 West Avenue E17. Not just a typically dirty, squalid walking environment but also one which breaches Government guidelines for the disabled.

An interesting story in the local paper:

A STUDY aimed at improving equality between disabled and able bodied people was not carried out by the council, contrary to law. All local authorities have to carry out a disability impact assessment under the Disability Discrimination Act (DDA) before making major decisions. But Waltham Forest Council admitted none was undertaken before St James St Library, Walthamstow, was closed, despite it having one of the few disabled toilets in Walthamstow.

And it's not just libraries. On its streets this Council repeatedly breaches national guidelines for disabled people. Let me cite something which you’ll be hearing about again on this blog. Here are the official national guidelines:

A clear width of 2000mm allows two wheelchairs to pass one another comfortably. This should be regarded as the minimum under normal circumstances. Where this is not possible because of physical constraints 1500mm could be regarded as the minimum acceptable under most circumstances, giving sufficient space for a wheelchair user and a walker to pass one another. The absolute minimum, where there is an obstacle, should be 1000mm clear space.

Now look at West Avenue E17. Where the road crosses the railway the footway narrows to a little over one metre – just within the guidelines. But some years ago it was determined that this bridge, in common with many others in the Borough, required strengthening. Network Rail say it’s a local authority responsibility, and the Council says it’s Network Rail’s. Stalemate. Nothing has been done for years. But it would be hazardous to allow vehicles to park on the footway on these bridges, as it would further weaken them. As no one is prepared to spend any money on the problem (until one of these bridges collapses, with potential serious loss of life), the Council came up with a cheapskate solution. Blocks of wood on the pavement!

It had other alternatives. It could have made West Avenue one way, put the blocks of wood in the carriageway, and introduced a restriction on Heavy Goods Vehicles. Instead it went for the highway engineer’s favourite solution: dump the problem on pedestrians and footway users. Which is why it is that the footways on both sides of West Avenue at this point have been artificially narrowed by the Council to point nine of a metre – below the guideline’s absolute minimum.

But if this Council can save a bit of money by discriminating against wheelchair users, why should Councillors Belam and Loakes worry about a trifle like national guidelines for the disabled? If you turn round and look in the opposite direction you can see a classic failure of urban design. Instead of a bench, a flowerbed, perhaps a piece of sculpture, there's a badly sited lighting column and extensive space devoted to those residents who want to acquire a second or third car. 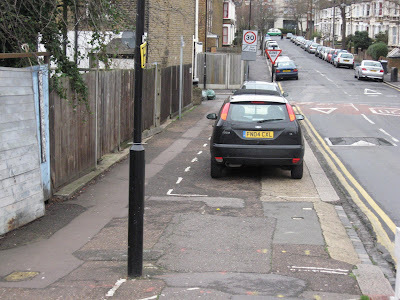 Incidentally, the footway on the other side of West Avenue also breaches the national minimum guidelines for wheelchair users. Some footway users with a mobility handicap are forced into the road at this point: 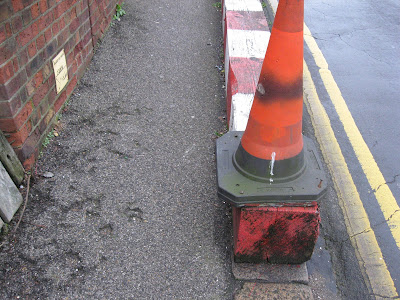 Posted by freewheeler at 09:30