From a cycling perspective, the most depressing documentary I watched in 2007 was one about bike theft in London. The programme makers demonstrated that even expensive bike locks are useless against professional bike thieves. I had naively assumed that my trusty D-lock made my bike safe. That complacent assumption was shattered by the programme makers, who showed that bolt cutters can snap open even the finest D-lock in less than sixty seconds. They also demonstrated that when someone in the street starts hacking away at a locked bike with bolt cutters, passers-by take no notice. They even locked a bike up outside New Scotland Yard, then sent someone along with bolt cutters to liberate it. No police officers came running (though later on they did show a dedicated anti-bike-theft police team swooping on bike thieves at a selected location in the City). Bike thieves seem to break down into two groups. The professionals, who steal hundreds in order to sell them on at street markets, and kids, who want a bike for their own use and nick the first shiny mountain bike that takes their fancy.

What I would find useful to know is what the level of bike theft is in this Borough (official figures are likely to be an underestimate, as victims of theft don't always bother to report it) and where the cycle theft hotspots are. My impression is that the Town Square is a hotspot, but I base this purely on a letter that appeared in the local paper from someone who saw a bike thief with boltcutters in action there, and from those mysterious necklaces of bike locks which dangle bikeless from the stands.

And this (below), for example. This bike torso has been in the Town Square now for several weeks. Did someone make off with the wheels and the owner then decide to abandon the rest. Or was the bike parked there by someone who never came back for it, with the result that scavengers started to prey on it? That bike lock doesn't look cheap. It's a mystery. It's alright slapping HAVE YOU LOCKED YOUR BIKE? stickers to the stands - though I find it hard to imagine any cyclist just propping their bike there and breezing off without locking it - but even though I always do I still feel nervous. 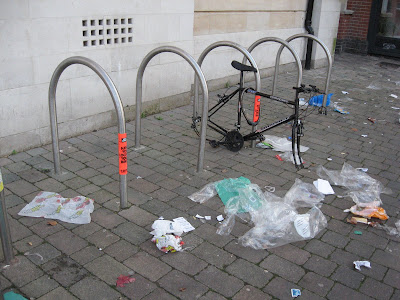 Posted by freewheeler at 11:50