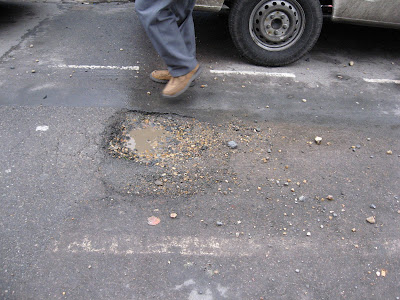 This pothole on Cleveland Park Avenue close to the junction with High Street is perfectly located to encourage cyclists to move out into the centre of the carriageway, to be hit either by an overtaking vehicle or to meet head on a car coming round the blind corner. Another triumph for the Council's 'efficiency savings'!

Andy Hillier, 30, was riding to work when his rear wheel was wrecked as he hit a pothole in Uxbridge Road. The journalist had to push his £500 Marin bike back home before travelling to work by Tube after the accident in June. He filed an official compensation claim with Ealing council and expected to receive a cheque within days. But his application was turned down twice and, determined to persist, Mr Hillier was stunned when the council appointed solicitors to deal with the claim and sent him a 12-page dossier explaining why it was not prepared to pay.

He responded by taking Ealing to a small claims court where a district judge said he was "deeply disappointed" that the council had decided to defend the case in spite of overwhelming evidence in favour of Mr Hillier. "In my opinion this case should never have found its way to an open court trial," said the judge at Brentford county court.

Mr Hillier said: Ealing talks about being a cycle-friendly council but many designated routes in the borough are hazards.

Is it possible that there is another London council that reminds you of? 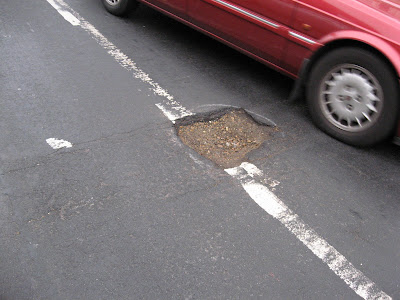 West Avenue Road, E17. This pothole was brought to the Council's attention months ago. Someone was sent out to paint a white circle round it. The purpose of this traditional folk ritual is not known. As you can see, the white circle has now almost completely faded. Perhaps the Cabinet all hold hands and hope that the power of positive thinking will magically fill up all the holes with gleaming fresh tarmac. Or does the circle simply signify zero - a symbol that nothing will be done about it?
Posted by freewheeler at 11:33