Danger at the Baker's Arms

I was cycling along High Road Leyton (A112) today, going towards Walthamstow. I was getting close to the Baker's Arms junction when I was overtaken by a 55 bus. It was going the same way that I was, left at the junction, along Lea Bridge Road. The bus overtook me. The lights ahead were at red. Instead of stopping at the thick white line which marks the start of the Advanced Stop Line for cyclists, the driver crossed the ASL and went right up to the edge of the pedestrian crossing markings.

I got out my camera and took the two photographs below. In the first one the lights are in the process of changing and the bus is still stationary. In the second the bus has vanished round the corner and you get a better view of the road markings.

A great deal of media attention is focused on cyclists who go through red lights - 'rogue cyclists' in the shrill words of the Evening Standard. My guess is that the rise in the numbers of cyclists red-light-jumping is an evolutionary response to the contempt which many drivers have for ASLs. Not only did this bus driver wilfully put cyclists and pedestrians at risk by illegally invading the whole of the ASL and beyond, if you look carefully you will see that the ASL in the background (on Lea Bridge Road) is completely blocked by a large truck and a Smart car. The truck is just the kind of vehicle which crushes cyclists to death when turning left at junctions of this sort.

I have no objections to the police handing out tickets to cyclists jumping red lights, but I would expect it to be a very low priority indeed and I would want to know what resources they put into ticketing drivers in ASLs. According to the Waltham Forest Cycling Campaign website:

Figures from Transport for show that 1020 fixed penalty notices were issued in in the last four months for driving offences. WFCC thinks that there is far too much poor and dangerous driving locally which can cause fatalities and that more police officers should be used to enforce the laws so that people drive more sensibly.

255 FPN's a month averages out at less than9 a day. This level of enforcement is risible, when every day there are thousands of acts of dangerous driving in this Borough. The solar powered speed signs flash all day long. The streets are full of drivers chatting on hand held mobile phones. What all this reflects is that traffic policing is no longer a core police duty. Drivers flout the law because they know the chances of getting caught are almost non-existent. Even when they are caught the penalties are small. You have to be caught four times driving with a mobile phone before you lose your licence.

In the first photograph the two women pedestrians are plainly crossing when there is no green light for pedestrians. But I have little doubt that when they set off to cross from the far side of the junction the lights were at green and went out while they were crossing. Here, pedestrians are given a few seconds to cross three lanes of traffic. The timing of phases at junctions like this is part of the way in which a sectarian transport system privileges drivers and discriminates against walking. Vehicle flow is regarded as a top priority. And even when facilities are provided for the safety of cyclists, there is no political will to enforce road traffic law, the flouting of which which has now reached epidemic proportions. 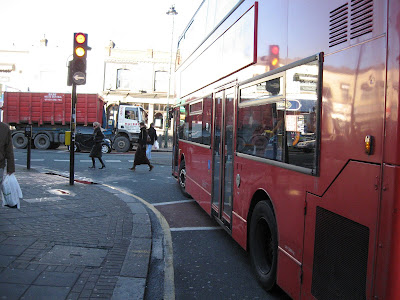 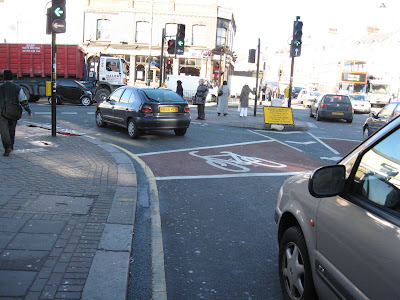 Posted by freewheeler at 14:50