The latest issue of wfm – why not pick up a copy from your local pavement – invites residents to ‘find out more about how Waltham Forest plans to help tackle climate change’.

See for yourself on the A112, where I spotted some nice fresh markings the other day (see photos below). Here, cycling seems to be in decline. Counts taken over a 12 hour period in the Crooked Billet underpass over the past decade – and most cycle traffic here is, I think, likely going to be flowing north-south rather than east-west – came up with these figures. 1998: 335 cyclists. 2002: 312 cyclists. 2006: 309 cyclists. It is not clear to me if these figures count cyclists going in either direction, in which case most cyclists are probably going to end up being counted twice.

In short, cycling accounts for only a tiny fraction of travel modes on this route. This fits in with TfL figures in their 2007 Travel Report. Fewer people cycle in Outer London than in Inner or Central London. The number of people cycling to work in Outer London even falls below the national average.

In the case of the Crooked Billet figures, cycling is falling (whereas on some other routes in the Borough cycling numbers have doubled in the past ten years). Undoubtedly the Crooked Billet underpass itself supplies a major deterrent to cycling. But I think conditions on the A112 in Chingford also probably put people off cycling. There is a cycle lane but the narrowness of the road ensures that overtaking traffic comes perilously close. When there is traffic congestion the cycle lanes are frequently obstructed by vehicles. On Old Church Road E4 there are no cycle lanes at all and cyclists get trapped in regular traffic congestion.

But the A112 has one major asset. There are substantial sections all the way from Chingford Mount cemetery to the greyhound stadium which have amazingly wide pavements. There is the potential for major improvements by widening the cycle lane and installing some form of physical separation between cyclists and traffic. There is also scope for brightening up the walking environment in all kinds of imaginative ways. It is highly likely that walking is as massively in decline in this Borough as it is in Britain as a whole, though it is impossible to tell because the Council is so contemptuous of walking that it has never bothered to take pedestrian counts. As Bob Belam’s unlamented predecessor breezily explained to the local paper a couple of years ago, pedestrian counts are “a waste of money”.

So given the Council’s commitment to ‘tackling climate change’ and given the slump in cycling (and, probably, walking) on the A112, what is its top transport commitment here?

You guessed. Using the pavement to create free car parking and to assist all those residents with off-street parking who wish to acquire a second, third or fourth vehicle. So it's no surprise, is it, that these photographs show cars but not a single cyclist or pedestrian. 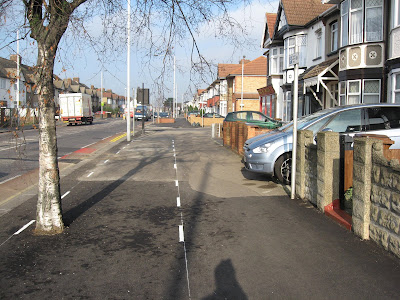 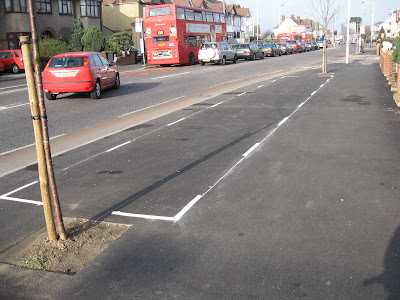 Posted by freewheeler at 08:03