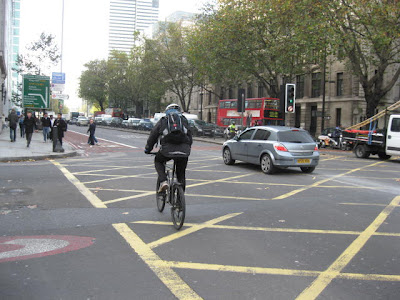 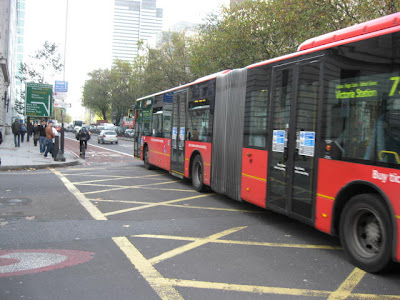 (Above) Euston Road (A501), junction with Gordon Street WC1.


Moving Target reckons that the danger of bendy buses has been overstated, which certainly seems to be the case where London cyclists are concerned. However, The London Bicycle Activist notes that Although there are only 350 bendies in the whole of London - around five per cent of the bus fleet - they are responsible for nearly 20 per cent of bus-related deaths.

There are no bendy buses in Waltham Forest, so they don’t rank at all as a local threat. You have to cross the border into Haringey to encounter them. Personally, I don’t like bendy buses in London. They annoy me most as a pedestrian in the West End. They straddle signalled pedestrian crossings and obstruct them when the phase turns to green for walkers. You then have five seconds to sprint round the back and get across the road before the traffic starts moving again. On wide streets like Piccadilly this is no joke. There are plenty of bendy bus drivers who are idiots.

As a cyclist I have a deep loathing of many bus drivers. I don’t find them threatening in a big way because in Waltham Forest their speeds are generally quite low. But they routinely drive into cyclists-only Advanced Stop Lines, they drift into cycle lanes without warning, and they jump red lights. I see this every week. But it’s much harder for a cyclist to end up under a bus than it is under a lorry. And I've never seen a bus driver chatting on a mobile phone.
Posted by freewheeler at 05:35