In praise of the Clyde Loakes administration 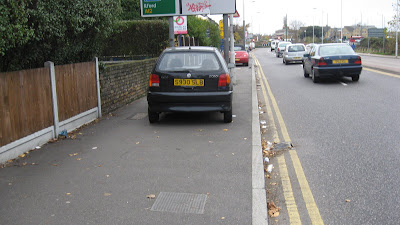 (Above) Pavement parking alongside the A113 in Woodford, London Borough of Redbridge

Waltham Forest is crap for cycling and walking, but to be fair the neighbouring boroughs of Redbridge and Newham are much, much worse. And when I venture into Hackney I’m always a bit puzzled why ten per cent of journeys there are made by bicycle. I think it has much more to do with the sort of cool, enlightened people who live there than the local council making Hackney a cycling paradise (it isn’t, that I’ve noticed).

Everything is relative. At a local level the transport policies of Labour councils tend to be more progressive than the Lib Dems (with occasional exceptions, such as Richmond), and both Lib Dems and Labour are way ahead of the car-infatuated Tories. As this blogger rightly points out you should never, ever, put Tories in charge of transport.

In Tory Redbridge (above) you can basically park on any pavement you want to, how you like, and the council will be totally indifferent to your pleas for enforcement. Whereas Waltham Forest would never tolerate scenes like this. My quarrel here with Waltham Forest is not its enforcement, which seems to me to be actually very good, but with its creeping seizure of pavements for legalized parking.

The Tories of Redbridge want to get rid of the traffic island because about once every two months a driver turning right here out of Chelmsford Road crashes into the nearest concrete bollard. Waltham Forest quite rightly thinks that the problem is with drivers, not with the traffic island. Whereas the Redbridge Tories know that traffic islands are just part of the war on the motorist.

This may be the only occasion this blog ever celebrates the marvellous and progressive administration of Councillor Clyde Loakes. Enjoy this moment of bliss while you can. 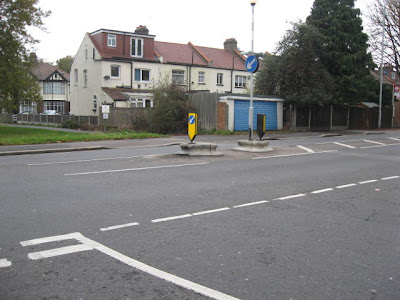