Manchester votes in favour of car supremacy and climate catastrophe 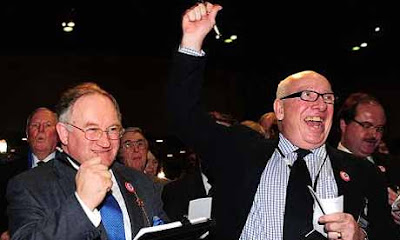 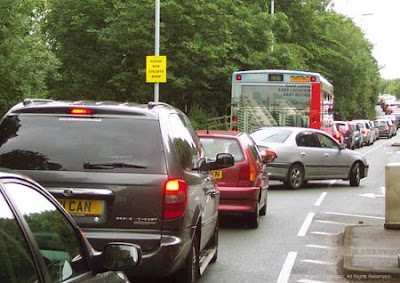 (Above) Congestion in Manchester.

Two absurdities of the Manchester congestion charge scheme were

(i) A massive programme of state subsidy for public transport was linked to a requirement that voters support a new charge for drivers. Car owning households were thus able to determine the fate of public transport users, cyclists and pedestrians.

(ii) Drivers were allowed to vote on whether or not they wanted to pay more. Hardly surprisingly they voted no. But pedestrians are not consulted when their pavements are converted into car parks. Cyclists are not consulted about new one-way systems, which are simply imposed on them. Bus, rail and tube users are not consulted when each year the cost of a ticket shoots up yet again, to pay for “improvements”. In a car supremacist society drivers are once again permitted to dictate outcomes in a manner denied to other social groups.

In reality in Manchester

Only one in 10 people would have paid the charge and no drivers would have been affected in two thirds of households.

According to the Independent it was a relatively cheap charge, amounting to less than the extra motorists might pay if the price of petrol returns to this summer's levels.

But the corporate media constantly promotes the idea that drivers are victims (QV. “the war on the motorist” (i.e. enforcing road traffic law), “car crime” (theft of or from motor vehicles is conceptualised as being much more important than the massacre of 3,000 people a year by machines deliberately designed to break the law) and “rogue cyclists” (demonising a transport group whose lawlessness is infinitely smaller than that of drivers, and with adverse consequences which are only a tiny fraction of that resulting from misuse of a motor vehicle).

This is the calibre of those opposing the charge. Sean O'Grady, The Independent 's Economics editor:

Manchester saw the congestion charge for what it was – a scam. Put bus lanes everywhere; close off streets and set the traffic lights almost permanently to red. Oh, look: congestion. The charge was invented to give Ken Livingstone, when he ran London, a way to raise cash that wouldn't hurt anyone but drivers, always a legitimate target for bureaucratic abuse.

No one can drive to work or shop because of pedestrianisation, parking charges and punitive fines. So city centres are slaughtered by the traffic Taliban.

In short, the usual petrolhead hysteria. And yet no Minister is prepared to stand up to this kind of garbage, which pours from the corporate mass media day after day.

The low response to the referendum indicates that the Labour-controlled councils promoting the scheme failed to persuade many non car-owners and public transport users that it was worth voting. By contrast, the “no” campaigners succeeded in getting a very large proportion of car-dependent commuters to vote against the scheme.

The leader of Manchester council says

'The issues have still not gone away. We still have issues of congestion, of poor air quality and poor public transport."

However, it’s plain from what The Greater Manchester Cycling Campaign said in its submission on the congestion charge (PDF format) that cycling is as marginalized and neglected in Manchester as everywhere else.

Friends of the Earth's senior transport campaigner Tony Bosworth said: "Greater Manchester has missed the opportunity to develop a clean, fast and efficient transport network. Investing in a state-of-the-art public transport system, cycling and walking would have brought massive benefits to ordinary people by tackling congestion, climate change and air pollution. But Manchester's loss could be another's gain. Government cash is still up for grabs and local authorities across the country now have the chance to bid for their own low-carbon transport systems.

"Road transport accounts for more than 20% of the UK's total carbon dioxide emissions. The Government must urgently introduce a comprehensive programme of measures to cut transport emissions as part of its plans to slash the UK's contribution to global climate change."

In reality our planet’s plunge towards climate catastrophe continues at every level, from the Manchester vote on fossil fuel addiction to the parochial crap illustrated on this blog to yesterday's EU fudge:

Rather like our own government, Merkel's administration is prepared to support only those measures which don't hurt big business. It pours billions of euros into useless schemes which generate corporate revenue (such as the half million solar roofs it has paid for so far, which contribute a grand total of 0.4% of Germany's electricity supply) and opposes effective schemes which would clobber carbon emissions but hurt corporate profits. The German government is prepared to go green only when it costs corporations nothing.

The obligation to reduce emissions within EU borders will be minimal - potentially no more than a 5 per cent target - and sets a devastating example to the rest of the world.

A five per cent target when even 20 per cent wouldn't be enough!

One calculation suggests that if all industrialized countries cut their emissions by only 20 per cent this would still result in a devastating global temperature rise of more than three degrees Centigrade."This would be catastrophic for people around the world and especially for those in developing countries, who are the most vulnerable of all.”

What has to be factored in to the latest calculations is that global warming is now being accelerated by natural forces – what is called global feedback.

In 2007, methane levels in the atmosphere, which had previously levelled off, began rising again. The most likely reason is that the Siberian permafrost is melting, as a result of the runaway warming of the Arctic. This wasn’t supposed to happen for another 80 years. The great global meltdown appears to have started, yet Turner proposes that we carry on with the old plan as if nothing has changed. We’re still digging trenches, even as the sky fills with bomber planes.

The UK needs to cut greenhouse gases by roughly 25% from current levels by the end of 2012 - a quarter in four years. But how the heck could this be done? Here is a list of measures which could be enacted almost immediately. They require no economic or technological miracles; but they do demand that the government is brave enough to govern.

Increase vehicle excise duty for the most polluting cars to £3000 a year (from the current £400). Use the money this raises to:

Start closing key urban streets to private cars and dedicating them to public transport and cycling.

Increase the public subsidy for bus and train journeys. Oblige the bus companies to sign contracts providing a wider range of services. Give us the integrated low-carbon transport we have long been promised, in which buses are scheduled to meet trains, trains and buses carry bicycles and safe cycle lanes connect with each other across entire cities.

Only emergency measures now have a chance of preventing a climate disaster.

It is dismally obvious that such “emergency measures” will only be introduced long after it is too late. We seem to be heading not for a planet two degrees hotter, or three degrees hotter, but four degrees hotter. If you want to learn what that means read this.

How will climate catastrophe affect the U.K.? In the first instance

the most significant impact would be rising sea levels and inland flooding. Climate modellers also predict there would be an increase in heavy rainfall events in winter and drier summers.

But that will only be the beginning.

Bob Watson, chief scientist at the Environment Department and a former head of the IPCC, warned this year that the world needed to prepare for a 4C rise, which would wipe out hundreds of species, bring extreme food and water shortages in vulnerable countries and cause floods that would displace hundreds of millions of people. Warming would be much more severe towards the poles, which could accelerate melting of the Greenland and West Antarctic ice sheets.Watson said: "We must alert everybody that at the moment we're at the very top end of the worst case [emissions] scenario.
Posted by freewheeler at 11:55