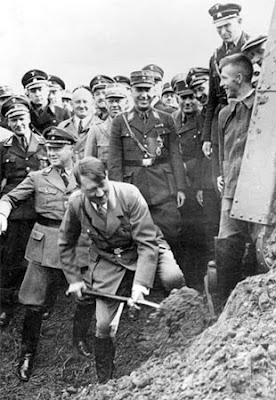 (Above) Hitler initiates construction of the first autobahn in 1933.

Today is the fiftieth anniversary of the opening of the first British motorway - a golden era for petrolheads, since in the early motorway days there was no speed limit.

And for many drivers who use motorways today there still isn’t!

In Germany this great tradition continues:

German Chancellor Angela Merkel, leader of the pro-business conservative Christian Democrats (CDU), has ruled out introducing a national speed limit as proposed by her SPD coalition partners. The SPD voted at a party conference last year to introduce a speed limit of 130 kph (80 mph) on motorways to help reduce CO2 emissions.Germany's motorways were built without speed limits by the Nazis, and since World War Two the influential car industry has lobbied hard against introducing the kind of national rules which are standard practice in other European countries.

Here in Britain there's a marvellous new exhibition to celebrate 50 years of car dependency and speed:

Visitors can get a sense of what life was like on the motorways back in the sixties and enjoy a cup of tea or coffee whilst the children have fun exploring the activity corner with costumes for dressing up, giant road maps and toy vehicles.

Anthea Purkis, M6:50 exhibition curator for Lancashire County Council, said: "The building of the Preston By-pass, the first motorway in Britain, played an important role in developing the motorway network in Britain today.“It is a significant part of our local history and something for the people of Preston and Lancashire to be proud of. 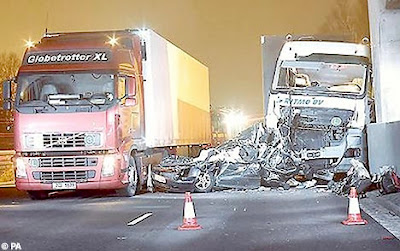