‘Shared use’: Sydney gets it wrong 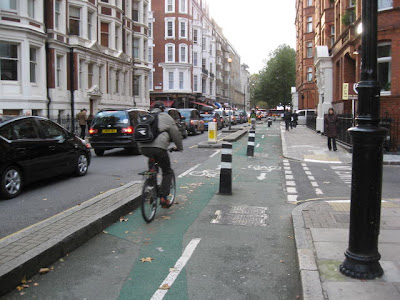 Byng Place WC1. Taking road space and turning it over to cyclists. This strikes me as providing a model of how London could be made cycle-friendly. Unfortunately I've never encountered anywhere else like this, and this particular route fizzles out at Tottenham Court Road.

There’s nothing wrong in principle with ‘shared use’ for cyclists and pedestrians. It works well on rural off-road routes. It happens on canal towpaths and on the South Bank. Generally speaking, it works best on leisure routes, where neither walkers nor cyclists are in a hurry.

Shared use is much less suitable for urban locations. A lot hinges on factors such as the width of the shared facility or the density of the pedestrian flow. Town centre pedestrian zones usually ban cyclists.

The danger of ‘shared use’ is that it is eagerly embraced by the road lobby and by highway engineers who want to get cyclists off the road, either because cyclists slow down motor traffic (which is so, so BAD) or it is ‘dangerous’ (i.e. speeding or inattentive drivers collide with cyclists).

Shared use is all too often an easy way of evading the problem of reckless driving or of encouraging fast motor vehicle flow. Dump the problem onto pedestrians, who always come bottom of the transport hierarchy (just below cyclists).

Sydney supplies a classic example of a car supremacist city which is patently prioritising car dependency and recklessness, while purporting to promote cycling via the ‘shared use’ option.

Pedestrians will have to share the pavement with cyclists under a bike path plan the City of Sydney council is considering for a busy CBD street. Under the proposal, the College Street footpath between Liverpool and Macquarie streets would be widened to 2.4 metres and shared between walkers and bike riders, resulting in the loss of 52 parking spots. At least 12 cyclists have been hit by cars or trucks on College Street between 2003 and 2007. The City of Sydney, flush with cash compared with other councils, is spending $70 million over four years on a cycling strategy, which will result in 55 kilometres of dedicated separated bike paths.

The paths will not result in fewer car lanes but will mean the loss of 166 parking spots "but that's within the context of 30,000 spaces in the city", Cr McInerney said.
Posted by freewheeler at 08:14