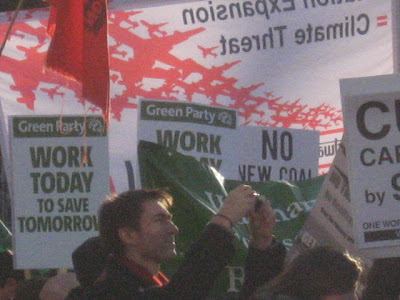 The London Bicycle Activist (love the new format!) has discovered that there's a local Green group. Me, I spotted them in Grosvenor Square at the end of the climate change critical mass. But the pic above was as close as I could get to them (with my bike) in the mass of people. That green banner behind the man taking a photograph represents our local Greens.

That depends what you mean by 'segregated'. I don't mind road space being seized from motor traffic and handed over to cycle lanes protected by kerbs. But that can only be done where you have two same-way traffic lanes and no on-street parking (i.e. hardly anywhere in London). I am not a fan of segregated facilities if it means sending cyclists and pedestrians into dark, lonely, filthy subways, to get them out of the way of cars. The reality of the London street network is that cyclists are obliged to share road space with motor traffic most of the time.

I am also wary of qualifications such as 'where possible'. That begs the question of who determines what is possible and what is not. The usual excuse for inaction when it comes to improvements for cyclists or pedestrians is that it is not possible because it would interfere in some way with the flow of motor traffic, or that there is no money available.
Posted by freewheeler at 06:24