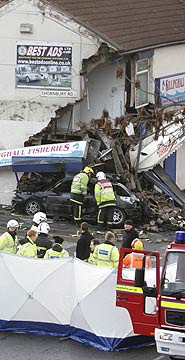 Look carefully in the photograph above and you'll see a 'shared use' sign, indicating that here pedestrians share the pavement with cyclists. And in this instance a Subaru Impreza.

"Impreza" is a coined word, deriving from an originally Italian word, impresa, meaning a feat or achievement. In Polish, "Impreza" means "party", "event" or "show".

and, wonder of wonders, it has a 4 Star Pedestrian Safety rating in the ANCAP crash tests.

There’s still a large proportion of buyers who won’t countenance an Impreza unless its got a turbocharger and the sort of acceleration to make you seriously ponder getting an RAF surplus G-suit.Sixty arrives in 5.4 seconds with a top speed posted of 143mph.

And then there’s this.

Naturally there's no moral panic about 'losing control' of death machines like this. Almost all sectors of the corporate mass media have a vested interest in car sales.
Posted by freewheeler at 19:46