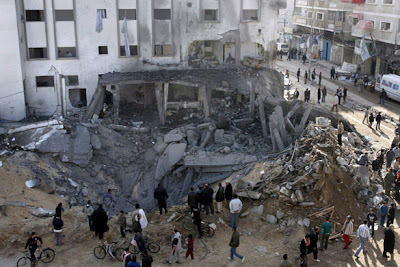 Look carefully and you'll see four cyclists beside what’s left of the Alshefaa mosque in Gaza. Mountain bikes - the perfect way of getting around when your neighbourhood has been shredded by F-16s and Apache helicopters.

What's the greatest killer of Israelis? Not what you might think.

On September 10, a grim milestone was marked: 30,000 Israelis had lost their lives in traffic accidents - 6,000 more than the total killed in all of the wars, terror attacks and violence since statistics began being recorded in 1960.

The probability of a road user in Israel being a casualty in a (reported) road crash was 5.4 per 1000 persons

The situation resembles that in Northern Ireland. Forty per cent of people killed during ‘the Troubles’ died as a direct consequence of conflict between the Protestant and Catholic communities. But a further sixty per cent were killed on the roads. That carnage was never noticed by the mass media.

The facts about driving are stark but wilfully ignored. Road fatalities will be the third largest global cause of death by 2020 and more people die each month on American roads than were killed in the September 11 attacks, but where is the war on cars? The majority of deaths spring from egregious human error, yet we persist in labelling them “accidents”. Such events are normal, not deviations from an otherwise safe activity.
Posted by freewheeler at 08:14