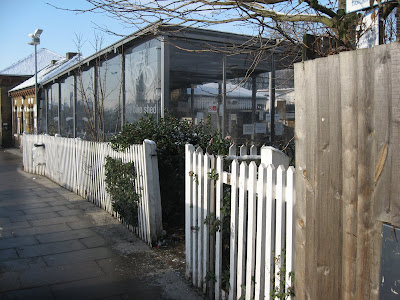 (Above) The way in to the Bike Shed at Walthamstow Central station.

First, some hyperbole from a cycling campaigner:

This is a truly fabulous cycle park. The beautiful structure, the level of security and the apparently good location offer an unprecedented level of service to the cyclist in the UK. So often cycle parking has been the type of drab building at the back of a car park or school. You almost have to do a double-take when you are using this cycle park: it is so well thought out. It feels as though you've entered a world where at last someone loves the cyclist, and it's a bit disconcerting. But no, you're not in Belgium, Amsterdam or Copenhagen. You really are in north London, by a railway station and this is cycle parking at its best in the UK.

There was a bit of a problem though. My own bike didn't fit in to the security device, and neither did another bike with an oversize down tube. This often happens when cycle parks put in only one type of bespoke cycle parking.

Yes, this truly fabulous cycle park used Sekura Byk, whose cycle stands have failed elsewhere in Waltham Forest and which the majority of cyclists prefer not to use.

I was promised that this would soon be solved by providing some simple Sheffield style cycle parking racks inside a spare corner of the bike shed.

In fact in the end ALL the Sekura Byk stands had to be ripped out and replaced by Sheffield stands. The Council was fortunate in keeping yet another example of poor decision-making and financial waste out of the local press.

There’s now not a lot wrong in principle with the Walthamstow Bike Shed, other than the reality that it is grossly inadequate. Walthamstow Central, where the Bike Shed is located, is the main station in the borough. It is where the Victoria Line begins in the north. The overground service provides four trains an hour to Liverpool Street Station, a journey of 18 minutes. There is a significant weekday demand for secure cycle parking facilities for those who choose to cycle to the station and then use the tube or overground. It is much, much quicker to travel by train or tube from Walthamstow to the City or the West End than it is to cycle.

According to the 2001 Census, the London Borough of Waltham Forest has a population of 218,277. Yet the Bike Shed contains just 28 cycle stands. Compare that risible provision with Assen:

Assen where we live in the Netherlands is a small city with just 65,000 inhabitants, but our railway station has 2300 spaces.

Once again, it underlines the poverty of aspiration of British cycling campaigners that they actually think pitiful provision like the Walthamstow Bike Shed is something to cheer wildly.

In reality this Bike Shed can’t meet the demand. One disgruntled user has sarcastically scrawled on the sheet informing newcomers how to apply for an access card IT'S OVERLOADED AS IT IS, MAKE A WAITING LIST!

But of course the solution is not rationing but massively expanded provision. You won’t get mass cycling just by urging people to cycle because it's cool and sexy and fun and Green and healthy. You’ll only get them cycling if it’s convenient, safe and attractive. There is ample scope for far greater cycling provision at this site, but it would mean using (horrors!) part of the station car park, or part of the very generous drop-off-and-pick-up bay on the other side of the station. Needless to say there is little chance of the car-crazed transport planners of Waltham Forest ever agreeing to such a radical proposal.

Even though this Bike Shed is supposed to be one of the jewels in the crown of the borough’s cycling provision, the lack of importance attached to cycling by the council is all too plainly evident at this site. The entrance to the shed has not been gritted. A bush has been allowed to grow up in front of the Bike Shed information notice on the brick wall nearby, providing a suitably concealed space for an assault to take place. (Look carefully and you’ll see one cyclist prefers to hide their bike in this obscure corner, locking it to a drainpipe.) Ironically, the information notice is out of date and supplies inaccurate information about how to get an access card.

Most tellingly of all, this Shed, which is normally packed out on a weekday, contained just 14 bikes yesterday. Most were on the same stands and in the same positions as they were the day before. In other words, there has been a very significant drop in demand which is plainly a response to the ice and snow. The regular commuters who use the Bike Shed are using other forms of transport. Waltham Forest Council has made no effort at all to grit major cycling routes or off-road cycle lanes, and cyclists have responded by choosing not to cycle. Demand is being suppressed. The notion that cycling is going to massively expand in an Outer London suburb like Waltham Forest is wishful thinking. 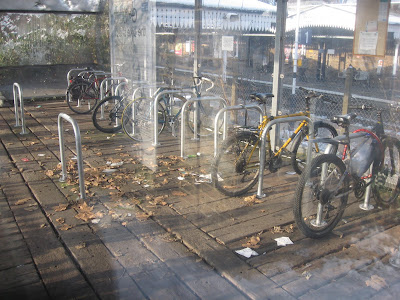 (Above) Well below capacity. The Bike Shed yesterday.

(Below) Not gritted. The entrance to the Bike Shed. 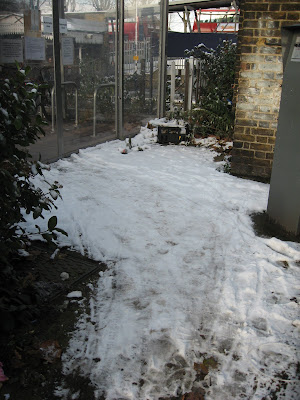 (Below) The overgrown, hidden space opposite the entrance to the Bike Shed. 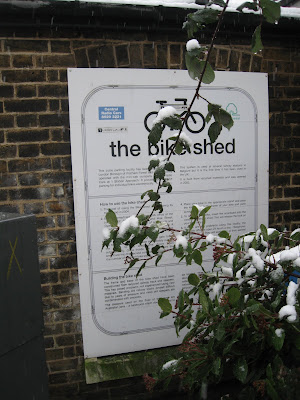 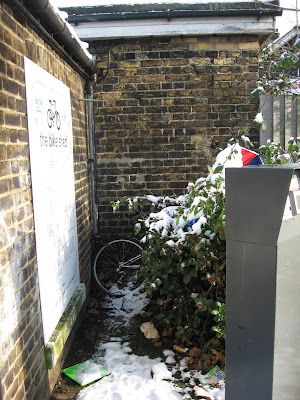 Posted by freewheeler at 10:06