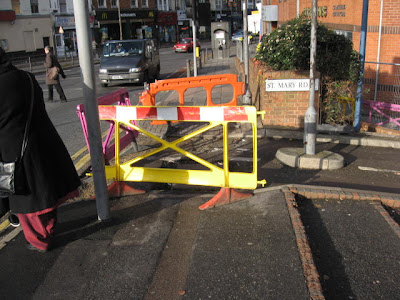 I waited at the lights on Selborne Road by Walthamstow Central station yesterday, crossed Hoe Street at green, and headed for the twin cycle lanes which cut through the closed-to-motor-traffic end of St Mary Road. And it was blocked off with fencing. (Coming from left to right in the photo above)

One of the lanes of this two-way system has been closed off for months by contractors (as we all know, when you are inconveniencing cyclists there is absolutely no hurry at all). But now both lanes are blocked off. There was absolutely no advance warning, which provides another interesting contrast with motor traffic. Drivers are given repeated advance warnings of the bleedin' obvious, usually in the forms of signs placed obstructively in cycle lanes. But cyclists approaching this popular facility and commuter route from either direction are given no warning at all. As for pedestrians, the contractors have also blocked off the footway, so walkers have to step into an A road to get past. And if you are in a wheelchair, well, that's tough.
Posted by freewheeler at 08:54