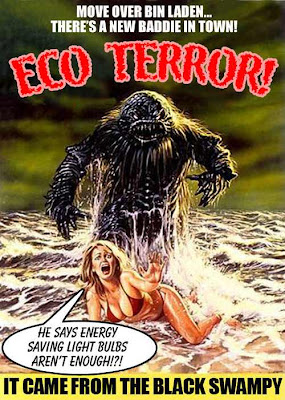 Earlier this month, The Observer smeared climate activists by highlighting police warnings of a “growing threat of eco-terrorism”. The alleged threat is presented by a group called Earth First!, which the paper claimed “has supporters who believe that reducing the Earth's population by four-fifths will help to protect the planet”. (Mark Townsend and Nick Denning, ‘Police warn of growing threat from eco-terrorists: Fear of deadly attack by lone maverick as officers alert major firms to danger of green extremism,’ The Observer, November 9, 2008)

The Observer implied no less than three times that Earth First! activists would not only like to see the Earth’s human population drastically reduced, but might be willing to take action to make that happen. The impression given was of a group bent on the mass murder of billions!

The National Extremism Tactical Co-ordination Unit was concerned that a lone maverick might attempt a terrorist attack. It had also warned several companies they were being targeted as major polluters by the group and had offered them advice on how to withstand attack.

It's perfectly legitimate to report police security concerns, but none of the statements were substantiated. No website links were offered, no names were mentioned, no companies identified and no police source would go on the record.

The article linked Earth First! to climate camps established last summer, including one at Kingsnorth power station, Kent, and at Heathrow.

Curiously, it turns out that this crock of garbage was co-authored with the help of an army officer.

A devastating analysis of the whole affair has now appeared on the MediaLens site:

Almost comically, the article focused on police concerns that “a ‘lone maverick’ eco-extremist may attempt a terrorist attack aimed at killing large numbers of Britons”.

If an entire group really is advocating mass murder, then presumably the concern is not for “a lone maverick”. And some kind of evidence - weaponry, plans, perhaps a declaration of intent - should be available to justify these extreme allegations.

But none was provided by the Observer. No climate camp has ever resulted in a conviction for a violent offence. Given the reality of impending climate catastrophe, the Observer’s demonisation of peaceable direct action is deeply irresponsible.
Posted by freewheeler at 15:55