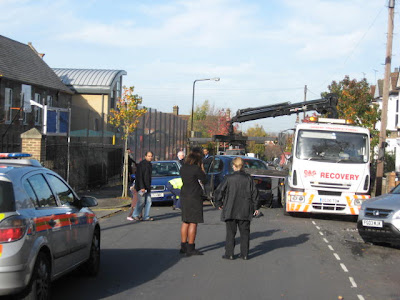 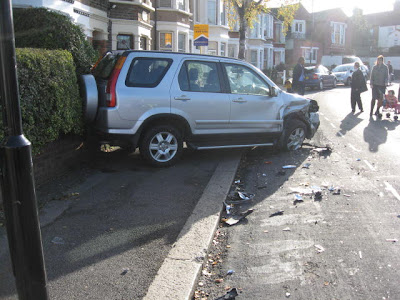 (Above) Melville Road E17 at mid-day yesterday, outside Greenleaf Primary School. Almost two months to the day after baby Finlay Woods was crushed to death in his pram by a drunk driver who careered on to the pavement, that tragedy came close to repeating itself. If it had done so this would have been a major national news story. Luckily on this occasion it was mid-morning, so all the children were in school and parents were not coming and going, and the driver hit a parked car, which acted as a barrier. Astonishingly, no one was apparently injured.

I came across the aftermath of the crash some time after it happened - perhaps an hour. There was quite a crowd, the road was blocked, and parents were coming and going with small children to the adjacent primary school (the nursery, I would guess).

What precisely happened? Apparently the male driver of a Renault Megane came tearing down Melville Road at high speed, going in the direction of Forest Road. He must have had his foot pressed hard down on the accelerator pedal as Melville Road has big old-fashioned solid road humps. I overheard local residents talking about the crash, who were saying that the driver was drunk.

The driver lost control after coming round a bend and collided with a parked 4X4, hitting it with such force that the vehicle was spun across the pavement. The Megane then continued on, heading straight for Greenleaf Primary School. (See first photo below) It was only prevented from mounting the pavement and smashing into the school railings by a parked car, which it hit and became embedded in.

(Below) The Renault was heading straight for the railings on the pavement outside the primary school when it smashed into the side of a parked blue Skoda. 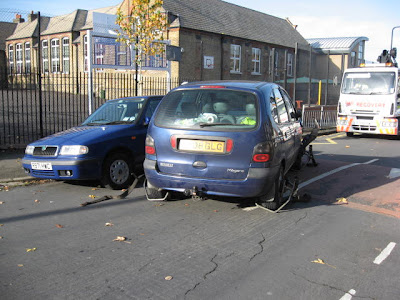 (Below) The force of the impact knocked this parked 4X4 across the pavement and into a brick wall. Luckily no one was walking past at the time. 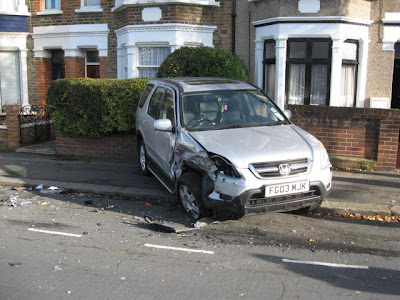 (Below) The offending driver was at the wheels of this dark Renault. Note the start of the school markings on the road surface in the bottom right hand corner. 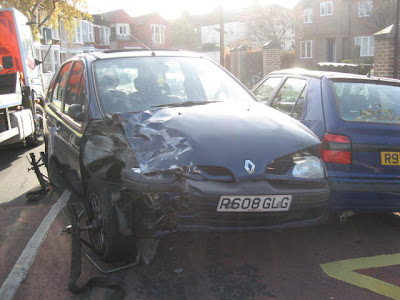 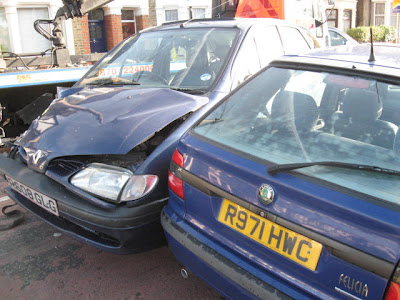 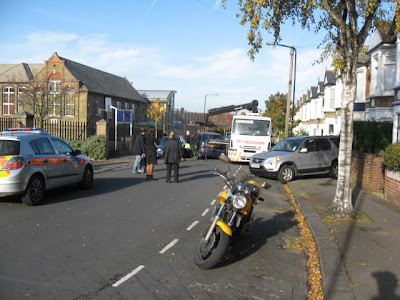 A few words about the car which caused this spectacular damage. According to Top Speed, the Megane is a socially responsible vehicle. What’s more every Megane model is built to exceed the maximum speed limit, and no Megane incorporates a black box which would accurately record speed at the time of a collision.

The manufacturers sponsor a High Speed Renault Festival: For Renault Mégane drivers, this meeting will be their first opportunity to see the most extreme version of Europe’s best-selling car racing door-to-door.

One other thing. The council’s Waltham Forest Road Safety Guide 2007/8 "is proudly sponsored by Renault".

As a non-injury crash this won't enter the 2008 road casualty statistics, by which "road safety" is falsely measured. We will no doubt be told next year that 2008 was a good year with casualties continuing to fall and Britain's roads getting safer and safer.
Posted by freewheeler at 08:20