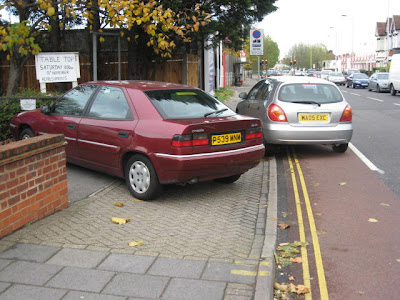 The pavement and cycle lane outside The Catholic Church of Christ the King on Chingford Road at mid-day yesterday. Where there are double-yellow lines, signifying NO WAITING AT ANY TIME.

The empty red car P539 MNM completely blocking the pavement almost certainly belonged to someone attending 11 a.m. mass. The church car park was full, so rather than park in the nearby free Sainsbury's car park and walk round the corner to the church, the devout driver preferred to block the pavement.

The silver car MA05 EXC was, I think, waiting to collect someone from the church service, which was about to end. 'Don't photograph my fucking car!' screamed the driver, a white male in his twenties, his face a mask of fury.

(Father forgive me for I have sinned. When the man in the silver car became abusive and confrontational I assured him I hadn't photographed his car. But I had!)

(Below) The church noticeboard. One of the worshippers had plainly turned up by bike but the Catholic Church is as pro-car and anti-cyclist as the C of E when it comes to parking... 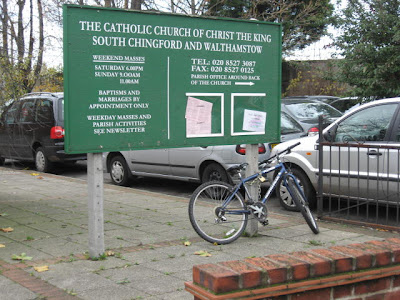 Posted by freewheeler at 07:14