The major form of violence likely to affect the average Londonder is road violence. Statistically you are far, far more likely to be involved in a road crash, whether as a pedestrian, cyclist or driver, than you are to be knifed or blown up by a terrorist. But the media colludes in the trivialisation of road carnage by largely ignoring it. BBC Ceexfax London news is a prime offender. This is the sort of incident that BBC Ceefax never regards as news:

A pedestrian was taken to hospital last night (Wednesday) after being hit by a car on a zebra crossing.The accident happened at around 6.45pm on Brighton Road, South Croydon.

The high incidence of pedestrians hit on zebra crossings, and the low level of penalties handed out to offending drivers (who are usually charged with 'driving without due care and attention') is no more likely to be registered by BBC news than the incidents themselves.

Instead, BBC Ceefax lazily recycles press releases, in classic examples of what Nick Davies means when he accuses modern journalists of supplying uncritical or trivial 'flat earth news'. And today's Ceefax London news supplies a prime example. A news service which has not mentioned a single one of the nine London cyclists killed by lorries this year, instead gives us 'news' like this: 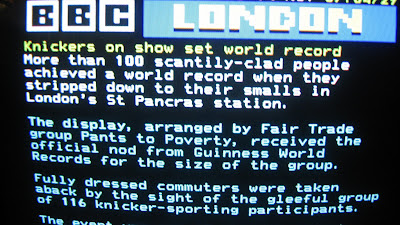 Posted by freewheeler at 08:04