Boris Johnson: bad for walking and cycling in London 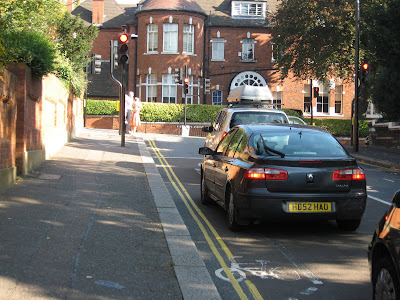 Boris Johnson’s transport plans as Mayor have just been published. What they boil down to is that the car is to remain king, public transport will continue to be inadequate and expensive, with bus and tube fares set to rise above inflation every year for the next eight years, pedestrians will have to wait even longer to cross the road at signals, pedestrianisation is being dumped at key locations, and cycling will remain a marginalised and needlessly dangerous way of getting around the city. Boris Johnson is on the side of pollution and the 4X4 brigade. Not that this should come as a surprise since he'd already

scrapped the £25 emissions charge for 4 x4s, waved through the rephasing of traffic lights to increase the flow of motorised traffic and abolished the mid-year inspections for taxis, despite many failing their emissions test.

Projects which will be scrapped under the plans include:

* Proposals for a £500million tram along Oxford Street.

* An extension of the DLR to Dagenham Docks, costing £750million.

* The Croydon Tramlink extension, that would have reduced journey times between Croydon and Crystal Palace to 18 minutes, at a cost of £170million.

* Public space proposals, costing more than £100million, including the pedestrianisation of Parliament Square.

It doesn’t get much more nihilistic and backward-looking than this.

Tube and bus fares in London will rise above inflation every year for the next eight years despite the cancellation of £3.7 billion of transport improvements, according to the transport business plan published by the Mayor of London yesterday. Boris Johnson has scrapped ten large projects to expand the capacity of the city’s transport network. The cuts will have the greatest impact on East London, especially the Thames Gateway redevelopment area, where 100,000 homes are due to be built but will now have little extra transport provision.

Transport for London had already spent more than £60 million designing and planning the schemes that were abandoned yesterday.

The mayor dropped plans to bring back trams to Central London after an absence of half a century. The Cross River Tram would have run between Euston and Waterloo, with several onward branches, and cost £1.3 billion. The £750 million extension of the Docklands Light Railway to Dagenham Dock and the £170 million Crystal Palace link in Croydon’s tram network have also been cancelled.

Plans for two new express bus services serving new estates in East London have been suspended pending a review, and a scheme to replace Oxford Street’s diesel buses with an electric tram has been abandoned.

Mr Johnson signalled that he would not take forward the plans of his predecessor, Ken Livingstone, to create more pedestrian space on London’s major squares. “Public space proposals such as Parliament Square, Euston Circus, and Victoria Embankment have been cancelled as they offered limited transport benefits and had the added disbenefit of restricting traffic flow,” the plan said.

There’s an element of class war to all this, since the main areas affected - Peckham, Barking, Croydon, Beckton, Thamesmead - are among the capital's poorest and least connected areas.

Like all Tories, Boris Johnson loathes and despises public transport. The Tramlink to Crystal Palace extension which was supported by 78 per cent of Croydon residents, would have reduced journey times between Croydon and Crystal Palace to just 18 minutes.

The press statement refers to

Continued investment in policing, security, and CCTV to make the transport network safer.

You can bet your boots Boris Johnson is not referring to roads, where policing and camera technology could make a massive difference to reducing the annual total of deaths and injuries.

It’s a ludicrous fantasy that fiddling with traffic light phasing is going to reduce congestion. London’s problem is too many people making journeys by car. That will only change when car drivers are charged for the true social costs of their journeys, and placed at the bottom of the transport hierarchy. At present the car is still king and pedestrians and cyclists are marginalized and massively discriminated against. Boris Johnson is not going to change that state of affairs but rather to perpetuate it and even worsen it.

The proposal to allow motorbikes into bus lanes has alienated both of the leading cycling organisations in the UK, as well as transport campaigners:

Christian Wolmar, a board member of Cycling England, said: “Now buses and bicycles have learnt to live with each other, the lanes are very safe for cyclists. I’ve no doubt motorcyclists will make cyclists less safe by breaking the speed limit. “To encourage cycling we have to make sure it’s safe and allowing motorcycles in bus lanes doesn’t do that. If Boris Johnson wants novice cyclists to adopt his cycle-hire scheme, then he can’t allow speeding motorcycles in the bus lanes.”

There are some crumbs for cyclists:

Perfectly worthy, but not enough. A major problem for cyclists is the ubiquitous, inescapable presence of motor vehicles and the way they are driven. But Boris Johnson is not going to address the issue of car ownership and use.

A fair approach to all road users, including an end to the punishment of motorists when they have no alternative to the car.

What on earth is he talking about? In what way are drivers punished?

Apparently He aims to reduce the number of speed bumps, the road humps intended to force drivers to reduce their speed, and to shorten the duration of red lights.

There will also be a reconsideration of various so-called traffic calming measures that tend to increase the amount of congestion.

Fortunately many of these schemes lie outside the Mayor’s remit and will be resisted by Labour and Lib Dem councils.

The weakest link in all transport strategies is invariably walking. Johnson’s walking vision is impoverished and inadequate. There are some platitudes about getting rid of street clutter. There is nothing about footway parking or the way in which pavements all over London have continued to be commandeered for parking and the promotion of increased car ownership and bigger-size vehicle ownership.

But the most important transformation is in the balance of power between the pedestrian and the motorist. It is not that the car is banned from these spaces. It simply introduces an idea of shared space, an imperative that all road users have to think responsibly

As respect for road traffic law has collapsed among all road users in London how on earth is this pious goal to be achieved? I’ve tried walking on roads where the pedestrian is supposed to have equal status with the car. Try and assert your equality and you’ll wind up dead or seriously injured.

If we can pull them off without excessive (or any) damage to traffic flow, they will add greatly to the look and feel of living in London.

But traffic flow is precisely the problem. It is farcical and barbaric that pedestrians on streets like Regent Street are subordinated to morons in 4X4s. Central London doesn’t need any cars at all.

But I am the first to admit that some cyclists do not go out of their way to earn the admiration of other Londoners. They jump the lights. They go the wrong way down one-way streets. They mount the pavements and terrify pedestrians. If we are going to do so much more to encourage cycling – and we are – then cyclists must understand that I will encourage – with my policing hat on – whatever steps are possible and necessary to crack down on aggressive cycling.

Well perhaps Boris Johnson hasn’t noticed but drivers jump the lights, drivers go down one-way streets the wrong way, drivers flout the speed limit, drivers mount the pavement, and drivers have contempt for cycle lanes and ASLs. Aggressive and lawless driving is an infinitely worse problem than lawless cycling, both quantitatively and in terms of its human impact.

In reality Johnson’s plans for London represent a massive attack on just the kind of visionary projects needed to transform London from the crappy, backward, car clogged city it currently is.

TRANSPORT for London is to axe more than 100 workers days before Christmas, the Standard can reveal. The staff, whose main job is to tow away illegally-parked cars on red routes, are being made redundant after TfL scrapped a five-year deal with contractor Ontime Automotive Ltd after less than a year.

A TfL spokesperson said: “Transport for London does not want to issue penalties or remove vehicles unless it is necessary. We want to help motorists understand and abide by the regulations. Where we do need to enforce, this must always be proportionate.

Hilarious. Easing up on parking enforcement – that’s really going to speed up traffic flow isn’t it?
Posted by freewheeler at 12:32