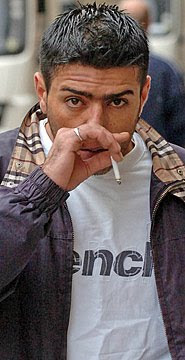 Mohammed Ibrahim 30, an Iraqi Kurd, fought deportation while claiming his life would be in danger if he returned to his native Iraq. He was jailed for four months after fleeing from a crash in which Amy Houston, 12, was killed beneath the wheels of his Rover car in November 2003.

Weeks earlier he had been banned from driving for nine months for driving while disqualified, without a licence and having no insurance.

Three years later he was again convicted of driving while disqualified and 14 months ago was taken to a deportation centre with a view to removing him from the country.

Amy's family have reacted with “outrage” to the decision by a court in Manchester this week to allow Ibrahim, an Iraqi Kurd, to remain in Britain permanently.

For killing Amy Houston he served two months of a four-month jail term.

The answer to that is that the right to drive is the most cherished right in Britain today.

I’ve been unable to find out what driving ban was imposed after this killer’s fifth offence, which says a lot about the standards of the British media. But I’m quite sure it was at best a few years.
Posted by freewheeler at 12:55